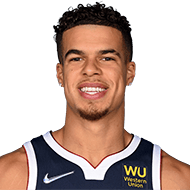 Michael Singer: Michael Malone tells reporters that Nikola Jokic will play tonight. The other questionables — Jamal Murray and MPJ — are out.
4 days ago – via Twitter msinger

“Offense for me should be on autopilot,” Porter said. “I should be focused on the intangibles, the defense, the rebounding, the dirty work. Then that just involves you in the game. If you’re struggling on offense and you’re also not rebounding or playing defense, then it’s like, why is he out there right now?” Despite his maximum contract, Porter isn’t guaranteed to be out there in closing situations for the Nuggets. Coach Michael Malone, for instance, opted to go with defensive-stopper Bruce Brown instead of Porter down the stretch of a close win against the San Antonio Spurs on Nov. 7.
6 days ago – via Brian Windhorst @ ESPN

Before Michael Porter Jr. left the arena late Friday night, he sat at his locker engaged in an extended conversation with an unlikely source. Reserve forward Vlatko Cancar spent considerable time talking with Porter, who struggled through a second consecutive unsettling shooting night. Porter finished just 4 of 15 from the field for 10 points, and only 1 of 5 from 3-point range.
1 week ago – via Mike Singer @ Denver Post

share
tweet
send
sms
email
“We need Michael,” Malone said after the game when asked how to help him re-gain his spark. Acutely aware of the three starters Denver was missing, Malone made an astute point on the gravity Porter had faced over the last two games. “I think it also speaks to the value and greatness of Nikola, how he gets guys so many easy looks because one, he attracts so much attention and he’s a great and willing passer,” Malone said. “While Nikola is not here, we have to find ways to try to get Michael some easy ones, and I think Michael’s gotta help himself at the same time. … Make or miss, continue to play hard, compete and fight.”
1 week ago – via Mike Singer @ Denver Post

Coming off arguably his worst game of the season on Friday night in Boston, Nuggets forward Michael Porter Jr. looked inward. After registering a season-low seven points and grabbing only four rebounds in Denver’s humbling loss to last season’s Eastern Conference Champions, Porter reached out to coach Michael Malone. He apologized for not being on top of his game and not being engaged against a team where there was no margin for error. He vowed he’d be better next game. “That, in and of itself, is maturity,” Malone said. “That, in and of itself, is ownership.”
2 weeks ago – via Mike Singer @ Denver Post