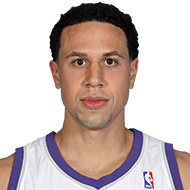 Mike Bibby is back on the bench — well, four benches, really — ’cause the former NBA star is joining the newly formed Fan Controlled Hoops, and he’s going to serve as coach for the entire league. TMZ Sports talked to the former #2 overall pick (1998 NBA Draft) … when he broke the news, he’s coaching again! “My main thing getting back into [coaching] is just so I can mentor these kids, get them on the right path, just teach them basketball, all the knowledge I have,” Bibby told us. FCH, like Fan Controlled Football, is different from other leagues … fans control select aspects of the actual gameplay. What play will the team run? Fans vote. There’s a ton of interaction … and the court will even look different.
2 months ago – via TMZ Staff @ TMZ.com

Sean Cunningham: Multiple sources confirm that Sac State has held a first interview with Sacramento Kings legend Mike Bibby for their head coaching position. The next step is for the former Arizona star to visit the campus. @Jeff Goodman first with the news.
9 months ago – via Twitter SeanCunningham