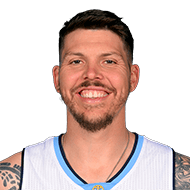 Position: -
Born: 02/19/80
Height: 6-8 / 2.03
Weight:218 lbs. / 98.9 kg.
Earnings: $99,376,913 ($119,844,245*)
0 share
share
tweet
pin
sms
send
email
In Hampton’s case, that means they haven’t seen him play in more than seven months. For much of that time, the 19-year-old guard has been working with former NBA sharpshooter Mike Miller on his perimeter shot. Hampton and Miller have spent countless hours training together in Memphis, working on everything from Hampton’s base to pulling up in transition. For Hampton, who skipped college to play in New Zealand, this is the equivalent of getting your PhD in perimeter shooting. “Mike’s a proven shooter, one of the best shooters of all time. So when you get to work with somebody like that, on a consistent, weekly basis, it’s great,” Hampton said. According to Miller, the results have been encouraging.
1 week ago – via SportsNet New York

share
tweet
send
sms
email
“With him and the way he plays, if he shoots — which I’m pretty confident in — in the next two-three years he’ll be a high 30s, low 40s percent 3-point shooter, he’ll be one of the best guards in the league,” Miller said in an interview with SNY. That may sound like hyperbole, but it should be noted that Miller has a track record of helping teammates and players he’s coached with their shots. So he speaks from experience.
1 week ago – via SportsNet New York

Storyline: GOAT Debate
share
tweet
send
sms
email
Four-star forward Mason Miller spent one night recently watching film with his dad, Mike, breaking down plays on how the senior can improve his game. Mavrick, the younger of the two brothers, will go over old highlights from Mike’s time at Florida and the NBA. But now it’s different. Mike Miller, who played with the Memphis Grizzlies and was a two-time NBA champion with the Miami Heat, will be their coach at Houston High School for the 2020-21 basketball season.
4 weeks ago – via Jonah Jordan @ Daily Memphian

share
tweet
send
sms
email
Mason and Mavrick, an unranked sophomore, will be playing together for the first time on the high school level, and people expect Mike will build Houston to the same level as Memphis coach Penny Hardaway did when he was at East High School. “I’m definitely excited to play with him (Mavrick),” Mason said. “This is the first year I really get to play with him so it’ll be exciting. We should be really, really good.”
4 weeks ago – via Jonah Jordan @ Daily Memphian

Barry Jackson: Duncan Robinson said Mike Miller was among former NBA great shooters who reached out to him during NBA hiatus in recent months. Joins Reggie Miller among those who spoke with Duncan.
1 month ago – via Twitter flasportsbuzz 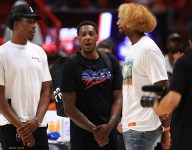 Mario Chalmers on vying for NBA return: 'To not even get a workout, it's disheartening'

share
tweet
send
sms
email
That next guy will be Miller, who will be coaching his son Mason, a highly-regarded class of 2021 standout, on Houston’s varsity squad next season. As a player, Miller won consecutive NBA championships with the Miami Heat in 2012 and 2013 and overall spent 17 seasons in the league, including two different stints with the Grizzlies.
2 months ago – via John Varlas @ Daily Memphian