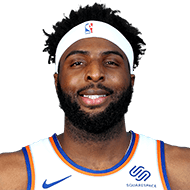 Washington and trade suitors have to consider that Beal has never made the playoffs without John Wall. So what would be the trade cost? Three different executives, who spoke to the News, defined the price as steep. One longtime GM laid it out specifically: three unprotected first rounders, two pick swaps, a young player and an expiring contract. That’s approaching Harden territory. The Nets, as the News reported, had internally discussed acquiring Beal long before exhausting their assets for Harden. As far as valuable young players, the Knicks can offer Barrett, Mitchell Robinson, Immanuel Quickley or Toppin. Their best player, Julius Randle, is only tied to next season with a $19.8 million team option.
2 weeks ago – via Stefan Bondy @ New York Daily News

Ian Begley: Knicks announce Mitchell Robinson will have surgery to repair fractured right hand. Sources confirm that the hope is Robinson will be back within 4-6 week timeframe, which was first first reported by ESPN. Big loss for NYK; Robinson is backbone of their top-10 defense.
2 weeks ago – via Twitter IanBegley

Adrian Wojnarowski: ESPN Sources: Knicks center Mitchell Robinson will undergo surgery on his fractured right hand and is expected to miss four to six weeks. Robinson suffered a fracture of the fourth metacarpal on the hand on Friday night vs. Washington.
2 weeks ago – via Twitter wojespn

Thibodeau said he’s not in any rush to add a big man. He hinted the Knicks could also “go small,’’ with the obvious possibility of Randle moving to center and Toppin getting more minutes as he continues to develop.
3 weeks ago – via Marc Berman @ New York Post

share
tweet
send
sms
email
When asked if he thought the Knicks would need to go outside the organization to fill the void left by Robinson’s injury, Thibodeau said he thinks the team’s existing talent is good enough. “We’ll have some flexibility,” Thibodeau said. “We can play smaller. I like what Taj gives us. Obviously the great value in the things that Mitch brought to the team is the defensive component. Nerlens does many of those same things extremely well, and of course Taj, that’s been his strength throughout his career. “I don’t want to lose that piece of it, but I like the way Obi is coming on, he’s giving us good minutes. We could downsize and play Kevin [Knox] at the four, we could play Julius at the five.
3 weeks ago – via Marc Berman @ New York Post