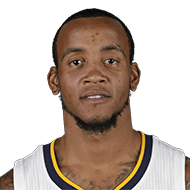 Former Warriors guard Monta Ellis sent out a warning to the rest of the league, saying Klay’s comeback will be “scary” for other teams. Although an exact date is unknown at this time, Thompson said during an Instagram live on Dec. 3 that his return could be in a few weeks or a month. And whether Christmas comes early this year for Dub Nation or not, it’s safe to say Klay’s return is coming soon. “That’s going to be scary for other teams because of how they are playing right now,” Ellis told 95.7 The Game’s “Steiny and Guru” on Friday. “But you can tell he’s determined to get back. He’s doing it the right way, not trying to rush back too fast.”
1 month ago – via Tristi Rodriguez @ NBC Sports

Storyline: Klay Thompson Injury
share
tweet
send
sms
email
Ellis, who battled a handful of injuries over the years — including his infamous ankle sprain suffered in a moped accident — offered a piece of advice to Klay. “The only thing I can tell him is, just keep working hard, stay focused and not try to overdo too much to where you can set yourself back. Just keep working hard and get strong, you going to be all right,” Ellis said.
1 month ago – via Tristi Rodriguez @ NBC Sports

On November 11, 11-11, former NBA star and Lanier standout Monta Ellis returned to his old school to his number 11 jersey get retired. Ellis was the 40th overall draft pick in the 2005 NBA Draft right out of Lanier High School.
2 months ago – via Joe Cook @ WAPT Channel 16

The Los Angeles Lakers continue to show interest in players who were stars in the past. The latest player the Lakers have shown interest in is veteran Monta Ellis, who has been eyeing an NBA return. “After working out with the Houston Rockets and Dallas Mavericks, Monta Ellis has received another interest from a contender in the Western Conference,” wrote Alder Almo of EmpireSportsMedia.com
4 months ago – via Justin Benjamin @ Lakers Daily

Kelly Iko: In addition to Monta Ellis, Gerald Green also worked out for the Houston Rockets this week, sources tell @TheAthletic.
5 months ago – via Twitter KellyIkoNBA

Alykhan Bijani: Sources tell me and @Kelly Iko that Monta Ellis worked out for the #Rockets this week. @Shams Charania and @Jon Krawczynski reported earlier this week he worked out in Dallas.
5 months ago – via Twitter Rockets_Insider