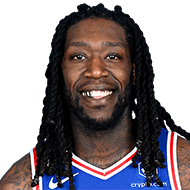 "I've never seen anything like that"
@Jumpshot8 has some career advice for Montrezl Harrell pic.twitter.com/OstbfAWdlq

Montrezl Harrell was not pleased when Giannis did that. pic.twitter.com/KBCUgGdC8r

Milwaukee superstar Giannis Antetokounmpo tried to shoot extra foul shots after a terrible game he had at the line. The Sixers’ backup center Montrezl Harrell and a coaching staff member, Jason Love, returned to the court, and Harrell took the ball from Giannis and refused to give it back. Harrell stood in the corner shaking his head and holding the ball while Antetokounmpo pleaded with him. “This isn’t f—— Milwaukee,” Harrell barked at Antetokounmpo, as witnessed by The Athletic. “Get that s— out of there.”
3 weeks ago – via Joe Vardon @ The Athletic

share
tweet
send
sms
email
Only when he came back, a Wells Fargo Center employee pushed a large, A-frame ladder in front of the hoop where Giannis was shooting. Antetokounmpo asked the man to move the ladder so he could finish his shooting, and twice the man said no. Now angry at the surprising circumstances he was facing, Giannis tried to move the ladder out of the way and wound up knocking it over. The arena employee scattered as the ladder crashed to the court. Video of the incident with the ladder was posted to Twitter by a Philadelphia fan in the arena.
3 weeks ago – via Joe Vardon @ The Athletic

Video of Montrezl Harrell taking the ball away while Giannis Antetokounmpo was shooting free throws after the game:

Giannis throwing down the ladder and disrespecting the employees of ⁦@WellsFargoCtr⁩ after losing to the ⁦@sixers⁩. pic.twitter.com/DBrRu1nq7K

share
tweet
send
sms
email
Harrell took the ball away and wouldn’t give it back. He apparently was upset that Antetokounmpo was preventing him from getting in his own work ahead of Philadelphia playing the second half of a back-to-back against the Minnesota Timberwolves on Saturday night. “I respect every player,” Antetokounmpo said. “I know some players don’t play now, they want to get some extra work, want to work on their skills and stuff, and I said, obviously we can shoot together. They said, they told me no, this is their court, I should leave. I was like, I have three more free throws, I was at seven, I want to try to make 10 in a row. I shot my eighth one. Came and took the ball away from me and I was very surprised. I feel like it’s very unprofessional. I would never take the ball away from a professional athlete when he’s trying to do his job.”
3 weeks ago – via Tim Bontemps @ ESPN