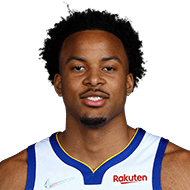 Golden State Warriors rookie Moses Moody this week said he modeled his game after former seven-time NBA All-Star Joe Johnson growing up because of the connection to his hometown. Moody revealed that he gravitated toward Johnson because the two are each from Little Rock, Arkansas. Watching a guy from the same hometown as him caught his attention early on, and knew he wanted to pattern himself around Johnson. “When I was young, I watched a lot of Joe Johnson. He’s from the city. He’s from Little Rock. He came back every year and played in the Dunbar League. He came back every summer, played there and put on tournaments around the city. He was kinda the blueprint and that was just somebody I always looked up to and said, ‘When I make it, I want to be like him.’”
3 weeks ago – via Cody Taylor @ The Rookie Wire

share
tweet
send
sms
email
Moses Moody, who Golden State selected with the 14th pick in this past draft, went on to team up with Barnes (and top pick Cade Cunningham, among other future NBAers and top college players) and Montverde. His first experience with Barnes was as an opponent. “On the court, you just think he’s crazy,” Moody said. “My first time really playing against him, he did a close out, he was on the other team, I’m shooting a 3. He had his hair going everywhere — that’s when he had his dreads and stuff. He’s coming out screaming. I missed the shot. It’s crazy. I was like, ‘What’s wrong with this dude?’”
1 month ago – via Eric Koreen @ The Athletic

Jordan Schultz: #Warriors lottery pick Moses Moody is signing a multi-year shoe/endorsement deal with Nike, per source. Moody, the SEC Freshman of the Year, averaged over 16 PPG during SL. Eric Musselman, his HC at Arkansas, has raved about Moody to me – re both his talent and professionalism.
2 months ago – via Twitter Schultz_Report

Moses Moody has watched plenty of Warriors games featuring Klay Thompson over the years, but the lottery pick said it was a unique experience to see the Splash Brother shoot in person.
2 months ago – via Alex Didion @ NBC Sports

share
tweet
send
sms
email
“Man, it looks different in person, that was obviously my first time seeing it,” Moody said on “The Jim Rome Show” on Thursday. “But watching that repetition, that exact same shot every one, I mean I sat there and watched him shoot for 20 minutes, and it didn’t touch the rim a lot, I can tell you that.”
2 months ago – via Alex Didion @ NBC Sports

Moses Moody hosted an autograph signing session for fans at a Walmart in Fayetteville on Saturday. Moody signed with memorabilia company, Upper Deck, and came back to his home state to celebrate the start of his NBA career. “Just being around the fans and the people that supported me throughout my college career,” Moody said of the event. “They’re a big reason why I’ve made it to where I am thus far, so I appreciate that and I’m glad to be able to come back and give them something.”
2 months ago – via Jourdan Black @ 4029TV