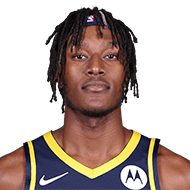 share
tweet
send
sms
email
Then there are the other members of the Best Five. Hayward won’t be opting out of his contract unless he has a long-term extension in place, which will be hard for a 30-year-old with a concerning injury history. Indiana is still home for the Haywards, and with Victor Oladipo looking to move on this offseason, according to sources, and Myles Turner possibly in the same boat, there could be an opportunity for Ainge to move Hayward and the abundance of draft picks in his war chest in a mutually agreeable way. Boston won’t have cap space again with three stars locked up long-term, so moving Hayward or Marcus Smart presents one of the few opportunities to get back a player making starter-caliber money.
1 month ago – via Jared Weiss @ The Athletic

The Pacers are said to have serious interest in hiring D’Antoni to replace the suddenly ousted Nate McMillan, which would give a needed jolt to Oladipo and Myles Turner. But there’s no guarantee they get D’Antoni — even with his contract in Houston about to expire and pressure mounting on the Rockets’ coach with a Game 7 looming Wednesday night against Chris Paul and the Thunder.
2 months ago – via New York Times

J. Michael Falgoust: McMillan: “If Myles is in the post with a small, we have to drop the ball to him and we have to win that matchup.” #PacersHeat
2 months ago – via Twitter ThisIsJMichael

Since he’s come back to you guys, there’s been some noise about him looking ahead towards his free agency. And, you know, you’ve been around the league long enough now where you see this stuff all the time, but teams like the Heat get mentioned. From your perspective, what do you make of that free agency talk a year in advance? Myles Turner: I mean, it’s just the media doing what the media does. They have to gaslight certain situations, and you know I don’t think much of it, because like you said, it’s really a year out. Ultimately, it’s going to be up to him and the decision he wants to make, or the decision the front office wants to make. So, until then, all you can do is control what you can control and just hoop on the floor. I think if he continues to be himself, then he can kind of create his own destiny, so I don’t pay much attention to all that stuff.
3 months ago – via Michael Scotto @ HoopsHype

This rumor is part of a storyline: 26 more rumors
share
tweet
send
sms
email
When you guys are in the locker room, obviously you hear about that stuff, or you see it on Twitter. Do you guys as his teammates and as friends also do you guys talk about that stuff? Myles Turner: Nah, man, we’re all professionals. We all know that, like I said, the media has to gaslight certain things to create a story or create a narrative. We really don’t care. We just play basketball.
3 months ago – via Michael Scotto @ HoopsHype

share
tweet
send
sms
email
When you first heard that Sabonis was out and definitely, what went through your mind? Myles Turner: Well, one of the first things that went through my mind was the fact that I’d be going back to playing the five. The five position is where I’ve become accustomed to being in this league. It’s where I’ve played my entire career. This year, I’ve had to play the four and spread on the perimeter a bit more. It was a little different for me because I wasn’t necessarily used to it in a sense. I could shoot the ball, but there’s a lot of other stuff that comes with playing the four position. Playing the five, you have the ball in your hands a lot more, you make a lot more decisions. You can get in more of a rhythm. I just knew I was going to have an opportunity to go back to my position and be able to step up and just play a more elevated role.
3 months ago – via Michael Scotto @ HoopsHype