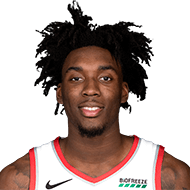 Trail Blazers rookie forward Nassir Little will see his first action Tuesday vs. the Oklahoma City Thunder in the Trail Blazers final scrimmage after being sidelined with a concussion. Head coach Terry Stotts announced the news on Rip City Mornings with Dan Sheldon and Nigel Burton. Little entered concussion protocol on July 20 after hitting his head on the court during practice.
4 months ago – via Peter Socotch @ NBC Sports

Nassir Little: Thank y’all for all the prayers and check ups, I’m doing good and I’ll be back soon. 💯
5 months ago – via Twitter 2ez_nassie

Nassir Little: How can y’all say all lives matter when black people are getting killed for being black, and children are separated from their families and thrown in cages? Obviously to someone, their lives don’t matter as much. And that needs to change!
6 months ago – via Twitter 2ez_nassie

share
tweet
send
sms
email
At the time, Dawkins says he was just trying to help Miller figure out how to win the recruiting battle. “Sean wanted Nassir really badly,” Dawkins said in the film. “He knew I had a relationship with the grassroots coaches who at that time I think we were all under the impression had the juice with the situation. I basically told him that it basically was going to come down to Miami and Arizona. And what I think needed to happen for the kid to come out to Arizona.”
9 months ago – via Yahoo! Sports

Casey Holdahl: No update on Nurkić nor Collins, though Little (ankle) will play and Hezonja (ankle) will not Friday vs. Pelicans.
10 months ago – via Twitter CHold