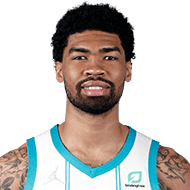 Rod Boone: Nick Richards (illness, non-COVID) has been added to the injury report and is out tonight. #Hornets are beyond thin.
1 month ago – via Twitter rodboone

share
tweet
send
sms
email
James Plowright: I’ve heard Nick Richards has stood out in camp, this was backed up by a player (can’t remember who, maybe Rozier) saying during an interview that he’d been playing really physically and was a presence around the rim
4 months ago – via Twitter British_Buzz

share
tweet
send
sms
email
Ball, who went undrafted in 2018, signed with the Oklahoma City Blue — the G League affiliate of the Oklahoma City Thunder — just three days prior to the league shutting down on March 12, 2020 due to the pandemic and never played for them. He inked an Exhibit 10 contract with Detroit in early December and was waived 12 days later, failing to appear in any games after reportedly suffering a right ankle injury. Besides Ball, the expectation is Vernon Carey Jr., Nick Richards and the team’s first-round pick on Thursday will be among those suiting up for the Hornets during summer league, per league sources.
6 months ago – via Roderick Boone @ Sports Illustrated

Charlotte Hornets President of Basketball Operations and General Manager Mitch Kupchak announced today that the team has recalled center Vernon Carey Jr. and center Nick Richards from the Greensboro Swarm, the team’s NBA G League affiliate. Carey appeared in 14 games for the Swarm in the G League bubble, averaging 16.0 points, 9.4 rebounds and 1.1 blocks in 26.5 minutes per game. A first-year player out of Duke, Carey has totaled three points, one assist and one block in three games for the Hornets this season.
11 months ago – via NBA.com

share
tweet
send
sms
email
Jay Hernandez: On top of having one of the best bigs in Vernon Carey, we were able to add another in Nick Richards who finally got to play his first game last Sunday. He entered the bubble and left after one day to rejoin the Hornets so having him back adds frontcourt depth that has really helped elevate our team.
11 months ago – via Jay Hernandez @ HoopsHype

The Charlotte Hornets are recalling rookie Nick Richards from the Greensboro Swarm to meet the NBA minimum of 12 available players. The NBA advised that since Charlotte has an open roster spot, sending Richards, Vernon Carey and Jalen McDaniels to the G-League bubble meant the Hornets were short one player for the NBA minimum 12 spots.
12 months ago – via The State