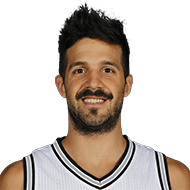 Position: -
Born: 01/31/90
Height: 6-4 / 1.93
Weight:180 lbs. / 81.6 kg.
Earnings: $204,601 ($251,539*)
0 share
share
tweet
pin
sms
send
email
In a conversation with Sergio Vegas, Laprovittola said that he’s upset with the whole situation and added that the NBA doesn’t seem like a good destination for Argentinians. “For me, the NBA is playing in the EuroLeague,” Laprovittola told Vegas. “I do not watch NBA, I got upset after what happened with Luca [Vildoza], Facu [Campazzo], and Gaby [Deck]. It is not a good destination for us.” “It’s a pity that in Argentina, playing in the EuroLeague is not as valued as [playing] in the NBA. Euroleague is so tough. You need to play hard. The physicality is extreme,” Laprovittola continued.
2 months ago – via BasketNews

After being cut by San Antonio, Nicolas Laprovittola returns to Europe as a member of Baskonia. The Spanish club announced that the Argentinian guard signed a deal until the end of the season. Laprovittola is replacing an other Argentinian, Pablo Prigionio, who decided to retire from basketball. The 26 years old guard is a member of the Argentinian national team and before signing with the Spurs this summer he spend last season in Europe, playing for Lietuvos Rytas in Lithuania and Estudiantes in Spain.
6 years ago – via EuroHoops.net