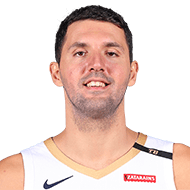 share
tweet
send
sms
email
This is why Mirotic decided to return to Europe in the summer of 2019. “My family was my first priority. I wanted my children to grow up here in Europe. We discussed a lot with my wife. It was the first time I put my family over my career”, he confessed.
4 months ago – via Miguel Lois Vidal @ BasketNews

share
tweet
send
sms
email
One of the most productive players in the EuroLeague remembered how his own dad put much more pressure on him than some of the coaches he has had. “People who are not professional in sport usually do not understand what kind of life we have. I have always had pressure during my life. When I was at Palencia on loan, my dad put much more pressure on me rather than my coach. If I had played a bad game, I could not stop thinking about how he would punish me,” explained Nikola.
4 months ago – via Miguel Lois Vidal @ BasketNews

It’s been a few years already since you came back from the NBA. Is there anything you are missing from those years? Nikola Mirotic: I would say I only miss playing against the best, those superstars like Durant, Harden, Steph, Giannis… It’s something unforgettable. Playing against LeBron… just amazing. Thinking that I also played with some of them like Anthony Davis, Giannis himself, Jimmy Butler, Derrick Rose… An amazing experience. You always want to play against these guys but apart from that, I don’t miss the NBA.
8 months ago – via EuroHoops.net

Still, the bottom line is simple: Nikola Mirotic remains the highest-paid player in Europe and that’s not going to change anytime soon and EuroLeague champion and MVP Vasilije Micic is the only really big winner of this summer with a contract that very few had in the history of European basketball. 1. Nikola Mirotic, Barcelona $4,5 M. The exact numbers of Mirotic’s contract remain a riddle and even $4,5 M can be pretty tame considering the rumors about the initial deal between the player and FC Barcelona. However, we are already in the third year of the contract and Barcelona is in total debt of more than one billion euros.
8 months ago – via EuroHoops.net

Nikola Mirotic will not be part of the Spain roster for the Olympic Games, barring a last-minute change, according to AS. Mirotic, 30, prefers to focus on his family after a complicated year at a personal level rather than following up the demanding season at the club level with the bubble expected for the Tokyo Games, notes the report. Perhaps FC Barcelona teammate and Spain legend, Pau Gasol, can change his mind but it seems the decision has been made.
11 months ago – via EuroHoops.net