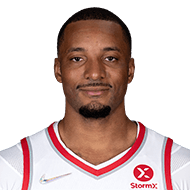 Position: G
Born: 05/25/93
Height: 6-3 / 1.91
Weight:215 lbs. / 97.5 kg.
Salary: $16,758,621
0 share
share
tweet
pin
sms
send
email
Clippers coach Tyronn Lue keeps bringing up the subject and Norman Powell continues not to listen when the conversation turns to the Sixth Man of the Year award. Powell insists he is not after individual accolades and the only hardware he wants to get his hands on is the Larry O’Brien Trophy for winning the NBA championship. “If I’m in the running and I get it, great, but I think the main focus is always trying to help the team win and be the last team standing at the end of the year,” Powell said. “That’s my main focus and whatever accolade you get on the way there, it’s a bonus.”
5 days ago – via Janis Carr @ Orange County Register

Grant is averaging 20.6 points and a career-high 46% from 3. The Trail Blazers are 5-2 when the forward scores 20-plus points this season. He is eligible to sign a four-year, $112.7 million extension starting on Jan. 7. And remember the Robert Covington and Norman Powell trade to the LA Clippers that was perceived as a salary dump? That trade added depth with the inclusion of the versatile Justise Winslow. More importantly, it allowed Portland to sign Anfernee Simons, Jusuf Nurkic, Gary Payton II and still stay below the luxury tax. Six months later, Portland finds itself with a 9-3 record and a top-10 defense.
2 weeks ago – via Brian Windhorst @ ESPN

Andrew Greif: Ty Lue had a conversation with Norm Powell recently and told him not to be discouraged about his start, and Lue said again today that it’s his responsibility as coach to find ways to get Powell more of a rhythm.
3 weeks ago – via Twitter AndrewGreif

Clippers coach Tyronn Lue entered the locker room intent on getting through to him. But instead of taking him aside at his locker, Lue delivered what was intended as a vote of confidence in Powell in front of the entire team. “He came in at halftime and told me, next time I put my head down on a missed shot, he’s taking me out the game,” Powell said. “So he’s pretty confident in my abilities and weathering the storm and waiting for that one game where everything starts dropping.” When that game comes, “it’s gonna be an avalanche,” Powell added. “Just be ready for it.”
1 month ago – via Andrew Greif @ Los Angeles Times

share
tweet
send
sms
email
“I think I’ve just got to relax a little bit and kind of let the game come to me and make the plays that are in front of me, not just for myself but for the team,” Powell said. “I’ll go back, continue to watch film, continue to find ways where I can be better not just scoring the ball but offensively, defensively, moving the ball, playing for others and continue just to grind. “It’s what I’m about, it’s an obstacle and I’m going to figure it out, sooner or later.”
1 month ago – via Andrew Greif @ Los Angeles Times