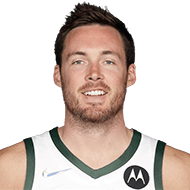 Shooting comes at a premium price in the NBA, yet the Bucks have Grayson Allen, Pat Connaughton, and Donte DiVincenzo on the payroll for less combined money ($14.1 million) than what Joe Harris ($17.4 million) and Duncan Robinson ($15.6 million) make individually for this season. Allen in particular has been excellent in his first season in Milwaukee after being acquired for pennies from Memphis this summer. With DiVincenzo still recovering from ankle surgery, Allen is taking full advantage of opportunities, and it’d be a surprise if he loses his spot in the starting five when DiVincenzo returns. Through 21 games, Allen is making 42.4 percent of his 7.5 attempts per game from 3. But unlike shooting specialists such as Robinson and Harris, the Bucks don’t have Allen fly around screens or sprint through handoffs then stop on a dime to launch 3-pointers. Instead, he gets open with subtle repositioning on the court to create massive passing windows. Or, he’ll set on-ball screens for Giannis Antetokounmpo and pop to a vacant space on the floor.
1 week ago – via Kevin O'Connor @ The Ringer

share
tweet
send
sms
email
“Look, LeBron is LeBron because of his ability to get other people involved and Giannis has all the ability to do the exact same thing,” Pat Connaughton recently told The Athletic. “And I think it’s just the more he sees his people guard him as an MVP, as a Finals MVP, the whole thing, he’s starting to anticipate how he can affect the game without just scoring.” “As he gets better and better at that, he’s going to be able to have his way in this league. I mean, we’ve seen it with all his freakishness, but that passing ability and that ability to read a defense and almost be a step ahead of a defense, it’s that mantra of he’s playing chess, not checkers.”
1 week ago – via Eric Nehm @ The Athletic

Jim Owczarski: George Hill is still going to start for the #Bucks, even as Jrue Holiday is expected to play. Hill joins Thanasis Antetokounmpo and Pat Connaughton again with Giannis Antetokounmpo and Grayson Allen. Sandro Mamukelashvili will not be active.
1 month ago – via Twitter JimOwczarski

The Larry O’Brien Trophy made its way to Danvers on Friday afternoon, as former St. John’s Prep star and current Milwaukee Bucks guard Pat Connaughton brought the NBA title to his former stomping grounds for a day of celebration. Connaughton visited St. John’s Prep to engage with students and families and lead a conversation, which tipped off the school’s annual O’Brien Family Student-Athlete Leadership Initiative.
3 months ago – via The Daily Item

share
tweet
send
sms
email
Connaughton is also the founder of the philanthropic With Us Foundation, which creates access to athletics for all kids, instilling life skills, values and wellness habits through sport. “I think one of the goals of the foundation for me is to revamp the way youth sports has become,” said Connaughton, who grew up playing in robust youth sports leagues in Arlington. “I think it’s become money-driven and the kids’ best interest isn’t always at heart. But I think playing multiple sports exposes you to different things and works different muscle groups and helps you not only become more athletic, but it also helps you become more well-rounded.”
3 months ago – via The Daily Item