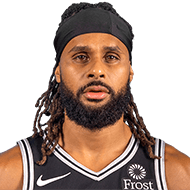 Tom Orsborn: Pop on DeMar, Patty & Jakob resting tonight: “As the season goes on, you look at schedule and minutes played and that sort of thing, people need to take a break. We did this with Dejounte a bit in the past and these guys need it tonight. They have hit the wall.”
3 days ago – via Twitter tom_orsborn

Gerald Bourguet: According to the NBA’s injury report, DeMar DeRozan (rest), Patty Mills (rest), Jakob Poeltl (rest) and Trey Lyles (right ankle sprain) are all out for the Spurs tonight
3 days ago – via Twitter GeraldBourguet

Eddie Sefko: Boban and Patty Mills share a hug as teams go on court for pregame warmups. Boban was a Spur a few years back and Gregg Popovich said pregame he’s not at all surprised that Bobi has become one of the most-liked players in the league. And he can’t wait to see the Goldfish ad.
1 week ago – via Twitter ESefko

share
tweet
send
sms
email
Tom Orsborn: Pop on Patty winning NBA Community Assist Award: “He’s a loving, involved, dedicated young man. It shows in a variety of ways and it’s been that way for many years. This award is great, but even without it, he’d continue to do what he’s always done. He’s just a special guy.”
3 weeks ago – via Twitter tom_orsborn

The NBA is honoring Spurs guard Patty Mills for his work with Indigenous youngsters in his native country. Mills, who has worked tirelessly to “empower Indigenous young people and advance social justice in Australia,” received the NBA Cares Community Assist Award for February presented by Kaiser Permanente, the league announced Wednesday. The award recognizes an NBA player each month who best reflects the passion that the league and its players share for giving back to their communities, according to a press release. It also honors the standard set by Spurs great David Robinson, who improved the community “piece by piece.”
3 weeks ago – via Tom Orsborn @ San Antonio Express-News

On Monday, the Spurs returned home to San Antonio Monday after a five-game road trip to face the Charlotte Hornets. Prior to the game, Spurs players decided to pay tribute to some of the all-time greats in women’s college basketball by wearing their jerseys to the arena.
4 weeks ago – via ESPN

March Madness is in San Antonio so you know our guys had to rep 🔥 pic.twitter.com/napskp5OgD