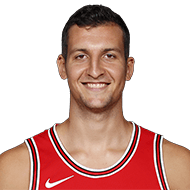 Germany grabbed a 74-64 victory against Australia in their exhibition game in the city of Jiangmen, the final one of their preparation. Dennis Schroder paced the Germans with 15 points, Maxi Kleber added 11 points, while Johannes Voigtmann and Paul Zipser added 10 points apiece.
3 years ago – via EuroHoops.net

Emiliano Carchia: Former Chicago Bulls forward Paul Zipser has signed a contract with German champions FC Bayern Munich, a source told @Emiliano Carchia. @BIG_Deutschland first reported the news about the agreement between the player and the team
3 years ago – via Twitter Carchia

share
tweet
send
sms
email
Boylen got to know Fleming most extensively when Fleming served as Germany’s national team coach and had former Bull Paul Zipser on the team. Fleming’s offensive ideas intrigued Boylen then.
3 years ago – via Chicago Tribune

share
tweet
send
sms
email
Stefan’s reputation in Germany helped to attract players who weren’t already in his purview. He helped sharpen the shot of Paul Zipser, who spent two seasons with the Chicago Bulls from 2016-18, and fielded requests from Maxi Kleber, an athletic big man who played with Paul for FC Bayern Munich—one of Bamberg’s biggest rivals. “I wanted to work with Stefan because he is one of the best when it comes to shooting,” says Maxi, who joined the Dallas Mavericks in 2017. “He is very open…very patient, takes notes and videos, and does his work very carefully. I learned about hand positioning, where my elbow should be, body positioning. We worked on a lot of things and tried to adjust everything. Probably too much to make a list. “It’s just his ideas, his exercises, that make him special. It’s different from other coaches.”
3 years ago – via Close Up 360