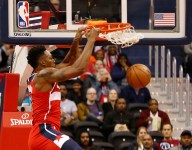 He’s played all around Europe for two decades, but Pero Antic decided to retire. Per Nikola Stojkovic of MOZZART Sport, the 36-year-old revealed to Antena5 that he will no longer play basketball at a professional level.
2 years ago – via EuroHoops.net

Former NBA Player Pero Antic is trying to revive his false arrest lawsuit against New York City. The former Atlanta Hawks center had sued the city in Manhattan Federal Court in April 2016. Judge Jesse Furman tossed Antic’s case in June, saying there had been “arguable probable cause” to arrest him. But Antic’s lawyers filed papers Thursday asking Furman to vacate his ruling. “The judge’s order did not to take into consideration vital evidence,” said Derek Sells, one of Antic’s lawyers. “As a result, we are asking him to reconsider his decision and allow a jury to hear this case.”
4 years ago – via New York Daily News

share
tweet
send
sms
email
Ex-ATL Hawks player Pero Antic just took an “L” in his legal war with the NYPD — after a judge decided the cop who pushed him during a 2015 incident didn’t use excessive force. Antic and then-teammate Thabo Sefolosha both sued the NYPD claiming cops got unnecessarily violent with them on the street … after another NBA player got stabbed in a separate incident.
4 years ago – via TMZ.com

Storyline: Pero Antic Case
share
tweet
send
sms
email
The club decided to assign Pero Antic back to the BSL roster, which has limited spots for non Turkish players. That made Bennett the odd man out after seven BSL games, during which he averaged 9 ppg and 6.4 rpg, playing 23 minutes per game. So far Bennett has also played in nine EuroLeague games, averaging 1,3 ppg and having very small contribution to the Turkish team, which will be the host of the EuroLeague Final Four.
4 years ago – via EuroHoops.net

Storyline: Anthony Bennett Free Agency
share
tweet
send
sms
email
Former NBA center Pero Antic filed a federal lawsuit against the city and NYPD, arguing he was unfairly arrested in connection to the stabbing of another hoopster outside 1OAK in Chelsea. Antic, 33, and Thabo Sefolosha, 31, were outside the club but not connected to the attack on ex-Knick Chris Copeland, allegedly by another reveler on the sidewalk about 4:30 a.m. on April 8, 2015.
5 years ago – via New York Daily News