Jared Dudley: @PoohJeter Man we need to know the details over there in China?!!!! How normal is it now compared too before the virus? What precautions are they taking to make sure there’s not another outbreak?? Are you able to training with your teammates now ?? Let’s us know bro! 🙏🏽
1 year ago – via Twitter JaredDudley619

share
tweet
send
sms
email
Pooh Jeter: Bro it’s starting to be normal over here in China. You have to get your temperature checked EVERYWHERE now. China is taking this very serious right now. And yes, my team is practicing. 5 on 5. We’re just waiting to see when the league is going to start back up.
1 year ago – via Twitter PoohJeter

As of now, among those who have returned to China are Lin, Ty Lawson, Donatas Motiejunas, Sonny Weems, Kyle Fogg, Pooh Jeter, Marko Todorovic, Antonio Blakeney and Ekpe Udoh. More are expected to return in upcoming days. Hamed Haddadi — a former NBA center and a veteran of the CBA — is currently held up in his home country of Iran, where the pandemic has also hit hard. His team Nanjing is working with the Chinese Embassy in Iran to aid in his return.
1 year ago – via Kevin Wang @ ESPN

share
tweet
send
sms
email
Ex-Sacramento Kings point guard Eugene “Pooh” Jeter was speaking to the players on former NBA star Paul Pierce’s AAU team in Los Angeles in June when one kid posed a question that sparked something much bigger. “We’re the professional basketball players, but these kids aren’t getting information from us,” Jeter said. “College and high school kids, they look up to us and have questions about pick and rolls and running offenses, big men [have questions] about the post. When I went to Paul Pierce’s AAU practice, afterwards I was talking to them and I was like, ‘Wow, there are a lot of things they don’t know.’ “One kid said, ‘We are trying to be where y’all at, but we can’t find y’all.’ They just want information.”
3 years ago – via The Undefeated 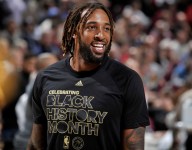 Derrick Williams: "People count me out. That’s why I got to the NBA"