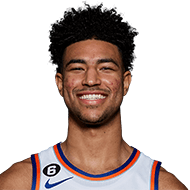 Grimes was on the court for 65 minutes over the past two games, including 33 in the Knicks’ win Monday night in Oklahoma City to complete an encouraging 3-2 road trip against several formidable Western Conference opponents. “I feel great … I feel like I’m kind of back to my old game shape, really,” Grimes said after the game. “We’re tired, but we wanted to come out [of the trip] 3-2, and that’s what we did.”
2 weeks ago – via Peter Botte @ New York Post

The Knicks appear to be against sending Quentin Grimes to the G-League to get in some reps. Although the young guard didn’t play for the first time when healthy during Tuesday night’s win over the Jazz, as coach Tom Thibodeau trimmed his rotation to nine players, and hasn’t played much this season due to a nagging left foot injury, it doesn’t seem like Grimes will be going anywhere to get some games under his belt. “I think him being here with us is the best thing right now,” Thibodeau said of Grimes who did not pay in the Knicks’ 106-103 win over Nuggets on Wednesday night.
3 weeks ago – via Zach Braziller @ New York Post 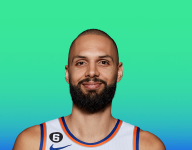 Thibodeau cut Evan Fournier and Quentin Grimes from the rotation and the move worked. The Knicks started this challenging five-game road trip out west with their best win of the season, a 118-111 win over the Jazz at Vivint Arena. “We wanted to see what it would look like and it gave us, I thought, better rhythm,” Thibodeau said. “That’s why we did it.”
3 weeks ago – via Zach Braziller @ New York Post

share
tweet
send
sms
email
“Just the rhythm of it, you’re learning your team,” Thibodeau said. “What works best? Are guys able to get in a rhythm? Those are the questions you ask. That’s why we did it.” It was somewhat surprising to see Grimes sit out the entire game, since he profiles as one of the Knicks’ best perimeter defenders and had such a strong summer. But he has missed so much time due to a sore left foot and only logged eight minutes each of the previous two games. Then there is the 30-year-old Fournier, who is making $18 million this year and set a Knicks record in 2021-22 for most 3-pointers in a single season. He has gone from an opening night starter to a reserve and now a bench-warmer.
3 weeks ago – via Zach Braziller @ New York Post

Ian Begley: For those asking why Tom Thibodeau & Knicks see Quentin Grimes as a ‘situational’ player right now: “He’s missed a lot of time. So the conditioning part of that is part of that equation. As he gets opportunities, he’ll play more & more,” Thibodeau said when asked about it.
4 weeks ago – via Twitter IanBegley