Position: -
Born: 09/25/84
Height: 6-4 / 1.93
Weight:207 lbs. / 93.9 kg.
Earnings: $7,581,406 ($9,416,110*)
0 share
share
tweet
pin
sms
send
email
McCants once told the Charlotte Observer Newspaper that had he not dated Kardashian, he’d be “a $60–70 million player, easily.” As for LeBron James? “He’s gonna run against Kanye,” said McCants. “I mean if I’m LeBron James, I already know that if I beat the Warriors, I can run for President. If he doesn’t beat the Warriors, he’s gotta run and hide for a few years. So this is the pressure he’s under. But I feel that if he can beat the Warriors, he can be President and he won’t have to play basketball ever again. He can just arrest all the Warrior players. I think that’s what he’s going for. He’s going to beat the Warriors and then have them all arrested after he’s President.”
3 years ago – via TheSource

share
tweet
send
sms
email
Jason Jones: Best part of this was Rashad McCants telling Martin late in the game to get out his way for an iso 😂😂😂😂 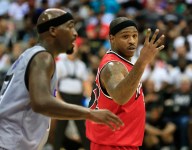 “You guys are so used to the softness of the league that you’ve never really seen guys argue on the court without the referees jumping in and saying ‘technical, flagrant, lala,’” McCants said. “We actually was out there, it was more satisfying for us to be able to get that out. That’s our passion, our true passion, competitiveness that have been held back for so long because in the NBA it’s not something that they’re accustomed to or they want, because it might get out of hand. But we were able to calm it down and it’s just a part of what we do, it’s a part of what we are.”
4 years ago – via Uproxx

In a wide-ranging interview with Rashad McCants, the BIG3 star of Trilogy told ClutchPoints that Arenas is very interested in giving the league a shot next year when asked if a proposed trio of former superstars Kobe Bryant, Paul Pierce, and Kevin Garnett would work and if any other former stars will join the league next season. “Absolutely,” McCants told ClutchPoints.com. “I spoke to Gilbert Arenas, and he said he’s definitely interested in coming in next year and a couple of others.
4 years ago – via Clutch Points

“It was the first practice. I had hamstring pull, third-degree hamstring pull, so I couldn’t participate in Summer League or the first practice. “We were there and I was sitting on the sideline. KG was just cussing at everybody. And when I say cussing at everybody, he was cussing at everybody including Kevin McHale. He was saying all kinds of ‘Come on out here and I’ll beat you down, too! You can’t guard me.’ Disrespectful stuff and Wally [Szczerbiak] subbed out, and I walked over to him, and I said, ‘Wally, does he do this all the time? Is this allowed?’ He said, ‘This is KG, bro. He does this every day.’ “KG is the second-best trash talker next to Gary Payton.”
4 years ago – via Clutch Points

share
tweet
send
sms
email
Do you think politics played a role in you being out of the NBA after four years? Rashad McCants: Well, if you look at my stats, they don’t say “bum” or “bust” or “trash” or any of those things that some of the fans or people in the NBA want to say. But those people don’t look back at my body of work – even with limited minutes. Politics definitely played a part in [my NBA career ending]. I’ve never been in trouble. I never beat someone up or gotten a DUI or anything like that. It’s politics and rumors. At the end of the day, you try to figure out who starts these rumors, but the NBA is like a fraternity and nobody will tell you who’s saying different things. You’ll never find out who’s telling people not to touch you. I just kind of stay away from it. Now, I’m just gracious for the opportunity that Ice Cube and Roger Mason Jr. have given me in the BIG3. This is a chance to resurrect my career and show people I can still play.
4 years ago – via HoopsHype