share
tweet
send
sms
email
Chris Bosh: Every day, I was inspired by Bron and D-Wade to push myself harder and reach higher. Not a practice went by during our four years playing together where they didn’t encourage me to leave everything on the floor; and I’d like to think I did the same for them. So, when Lebron told me he’d reinvented his post game in the first few weeks of the 2012 offseason, I knew I had to step it up. And I did. Quickly, our team’s mantra became “Repeat.” And with new additions to our team, like Ray Allen and Rashard Lewis, we were confident we would do it, as long as we kept the intensity at level ten.
2 years ago – via Chris Bosh @ The Last Chip 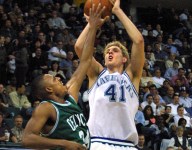 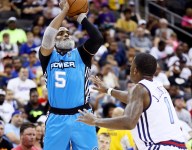 These are the top scorers in Big3 history

Chase Hughes: Former Wizards player Rashard Lewis is here at Capital One Arena for Wizards-Nets. He came here in the 2010 trade that sent Gilbert Arenas to Orlando.
2 years ago – via Twitter ChaseHughesNBCS

share
tweet
send
sms
email
The 2008-09 Magic lost in the finals, but despite that defeat, they rank as one of the most innovative teams in recent league history because of the way they played, how coach Stan Van Gundy deployed players and how GM Otis Smith built the roster. These days, basketball coaches, executives and fans consider the 3-point shot and stretch power forwards as necessary components to successful teams. But 11 seasons ago, heavy reliance on long-range shooting still was gaining acceptance. That Magic team helped transform conventional wisdom because it proved, for the first time, that a team could rely on the 3-pointer heavily, downsize its lineup for a full 48 minutes and win a conference title at the same time. “A lot of teams are playing small ball and spread the floor, a lot of big men in pick-and-roll, pop-and-shoot,” Lewis says now. “We were one of the trendsetters of it.”
2 years ago – via Josh Robbins @ The Athletic

Josh Robbins: J.J. Redick has passed Rashard Lewis for 17th on the career 3-pointers list with 1,788.
2 years ago – via Twitter JoshuaBRobbins