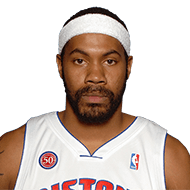 Jorge Sierra: Only two trade deadline acquisitions went on to average 20-plus minutes in the playoffs for the eventual NBA champion this century: Rasheed Wallace in 2004 Marc Gasol in 2019 That’s it, sorry.
4 weeks ago – via Twitter hoopshype

@vera: Who’s the best trash-talkers you ever faced? Gary Payton: Basically Larry Bird was really marvelous. Reggie Miller could do it a lot, Michael would do a lot of things too but you really had to get him going. But the greatest one is me. Rasheed Wallace was good but he was doing it at the refs.
2 months ago – via Adam Wells @ Bleacher Report

“You kind of go back to the old Detroit team that won it,” a longtime Western Conference scout said, referring to the 2003-04 Pistons, whose lone All-Star that season was Ben Wallace, a defensively dominant big man and Detroit’s sixth-leading scorer. “They just had a lot of really good players. “I thought Utah needed another star, but I’ve changed on that.”
2 months ago – via Tim MacMahon @ ESPN

“If it wasn’t something to do with you mom or your kids, I can’t roll with that.” Rasheed Wallace never pulls punches – verbally and, as many NBA fans know, physically – and he didn’t when giving Moose & Maggie that quote about Kyrie Irving’s absence from the Nets.
3 months ago – via radio.com

share
tweet
send
sms
email
“You saying you need space or whatever – this ain’t the summertime, so for me personally, we gotta talk about that, bro,” Wallace told Moose & Maggie on Wednesday. “You have a job you’re still getting paid for, and you have an obligation to your teammates. He might’ve talked to the owner, or the coaches or his teammates, but it’s no excuse he shouldn’t have been there. I understand the whole thing with social injustice, and he has a promise to fulfill to George Floyd’s family and all, but you still have a responsibility to the team. We see him on Zoom meetings for politicians, it can’t be that serious for what you wanna sit out for.”
3 months ago – via radio.com

Throughout 2020, two former NBA players, Rasheed Wallace and Stephen Jackson, have used their station and platforms to enhance the struggle for social justice. They will bring that activism to Memphis on Saturday, Dec. 13. Wallace and Jackson — a longtime friend of George Floyd, a Black man killed by a now-former Minneapolis police office in May — are scheduled to hold an event this coming weekend at the NAACP Memphis branch on Vance Avenue, according to Van Turner, NAACP Memphis president and a Shelby County Commissioner.
5 months ago – via Memphis Commercial Appeal

share
tweet
send
sms
email
Former NBA official Tim Donaghy alleged in the Let’s Get Technical podcast with former players Bonzi Wells and Rasheed Wallace that the latter was often the target of $20 bets among referees, about who could give the forward a technical foul first. “And speaking of those technical fouls, you know, especially with [Wallace], depending on who was refereeing the game, if I was with a couple of my buddies, you know, we’d throw $20 on the table when we had a team like Portland and [Wallace], and we’d say, ‘The first one to bang Rasheed with a technical foul gets $60.” So, there were a lot of games that, you know, went on behind the scenes. When you say you deserve those technicals, eh, probably a couple of them were given out a little bit quicker than they were for the next guy because of a simple $20 bet in the locker room.”
5 months ago – via Clutch Points