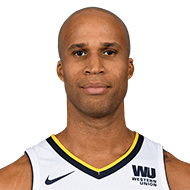 “I haven’t spoken to him, but I feel like him signing that extension was the biggest mistake he’s made in his career, and I stand by that” Jefferson said. “I don’t think leaving Cleveland, people might question why or how he left Cleveland, I don’t even think leaving Miami, Pat Riley at the time was like ‘Why are you leaving, we’re built for a long-term situation,’ went back to Cleveland, won a championship and even after he leaves Cleveland, Cleveland was like, ‘hey, we appreciate everything you’ve done,’ you come to LA, you win the championship.”
3 weeks ago – via Matty Breisch @ Clutch Points

share
tweet
send
sms
email
“Signing this extension last summer, it was just so confusing to me because I think he did it because he was committed to the organization. ‘You’ve got two picks, I’m going to show my commitment to you so you can go make some moves,’ because you knew what this team was a year ago and they haven’t added any tangible pieces . And for him to sign that extension, to show his commitment, the biggest confusion of all of the extensions was Rob Pelinka, because you were like ‘what has Rob Pelinka done?’ Because LeBron James? LeBron James came to LA because LeBron James wanted to come to LA. Anthony Davis was coming to LA because, well, he wanted to play with LeBron James and win a championship. So when you look at all of the moves made by Rob Pelinka, does he deserve an extension? So for LeBron James to commit to an organization and say ‘hey, do you know what? I want to be here, I want to make sure you feel comfortable to trade future assets, I don’t need a contender, I just need a good team.’ So for him to sit on the wall and be a good professional and say ‘well look, we’ve got a lot of guys who haven’t played’ this is arguably the greatest player we’ve ever seen, one, two, three, wherever you rank him, he’s about to pass Kareem as the all-time leading scorer, this is the roster you put next to him. The formula has been shown for two decades how to win with LeBron and they have thrown that all away.”
3 weeks ago – via Matty Breisch @ Clutch Points

share
tweet
send
sms
email
Clutch Points: “He was sending a message that ‘if you guys try and do this… this is what’s gonna go down.'” Richard Jefferson on Russell Westbrook attributing his hamstring tweak to him coming off the bench pic.twitter.com/fsyHJT4ebq

"He was sending a message that 'if you guys try and do this… this is what's gonna go down.'"

Richard Jefferson on Russell Westbrook attributing his hamstring tweak to him coming off the benchpic.twitter.com/fsyHJT4ebq

share
tweet
send
sms
email
Malika Andrews and the crew from “NBA Today” will have a bigger profile this season. Andrews will host the “NBA Countdown” studio show that airs during Wednesday games. Andrews will be joined by analysts Richard Jefferson, Chiney Ogwumike and Kendrick Perkins and senior NBA insider Adrian Wojnarowski. The coverage will mainly take place from ESPN’s Los Angeles studio, which across the street from Crypto.com Arena — the home of the Lakers and Clippers.
2 months ago – via YourValley

Big news in the NBA yesterday was that Suns’ owner Robert Sarver was suspended for one year and fined $10 million for allegations of racism and misogyny. Many in the NBA world are reacting, including players and executives. One notable reaction comes from former NBA player Richard Jefferson. Jefferson played in the NBA from 2001 until 2018, and is now an analyst on ESPN.
3 months ago – via Cam Cobey @ Clutch Points

share
tweet
send
sms
email
On NBA Today on ESPN yesterday, Jefferson made some striking comments on the situation. “When we talk about the players, I know multiple former Phoenix Suns players, obviously from our job and what we do, and just different guys that I know, none of this surprised any of them. When the story came out from Baxter Holmes, it was like ‘Oh yeah that sounds about right.’ or I would hear stories before this.”
3 months ago – via Cam Cobey @ Clutch Points