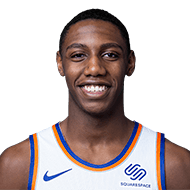 Position: G
Born: 06/14/00
Height: 6-6 / 1.98
Weight:202 lbs. / 91.6 kg.
Salary: $7,839,960
0 share
share
tweet
pin
sms
send
email
Considering Barrett is the Knicks’ most important bedrock piece, being left off both teams wasn’t a good sign. Relatively obscure first-year players such as P.J. Washington (Charlotte) and Terrence Davis (Toronto) edged Barrett out for second-team honors. “I thought he should have made it,’’ said one NBA head coach. “He had a significant role. Davis had a solid season but in a much lesser role.”
5 days ago – via Marc Berman @ New York Post

For Thursday’s NBA Draft lottery, “Lucky Leon” Rose will wear a replica of a special bracelet that a young Knicks fan/high school player gave to RJ Barrett before Rose’s first game as Knicks president on March 2. Barrett went on to score his career high 27 points and the Knicks beat the Rockets in Rose’s presidential debut.
1 month ago – via Marc Berman @ New York Post

And second, Bryant has a strong relationship with Jazz guard Donovan Mitchell, the Elmsford, N.Y. native who went off for 57 points in Utah’s loss to Denver in a playoff game Monday and becomes a restricted free agent in 2021. “They want him badly but may be a possible conflict with R.J. [Barrett],” a source with knowledge of the Knicks thinking said of Mitchell. “There’s a debate in the front office if they can play together.”
1 month ago – via Adam Zagoria @ Forbes.com

From early polling returns, there’s a chance Knicks prized rookie RJ Barrett won’t make any of the two All-Rookie Teams, which is surprising. Hoopshype.com did a poll of 10 ballots and Barrett did not finish high enough to make either team. Previously, celebrated journalists John Hollinger, Sam Amick and Zach Lowe revealed ballots that didn’t include Barrett.
1 month ago – via Marc Berman @ New York Post

share
tweet
send
sms
email
David Fizdale: I’m just hoping that I didn’t lose so many guys that I don’t get to sit in that seat again because I really felt like I can do it. You know, I proved that I can do it. And I just want that opportunity because I just learned after that situation that I think I got a lot to give to the next job that. If I can get the just the right pieces in place, boy, let me get a bunch of y’all running around out there. See what happened when I get junkyard dogs, a whole team full of them and see what happened. I had some puppies in New York. They weren’t your dogs yet. But I’m telling you: the kid Mitchell Robinson, Kevin Knox and RJ Barrett… Those kids are gonna end up being players in this league. They’re just babies.
2 months ago – via podbay.fm

Ian Begley: Tom Thibodeau was asked about NYK’s young players: “Based on film, I really think RJ (Barrett) has a very bright future as does Mitchell Robinson. Those are 2 who stand out. But we have a lot of young talent. I don’t like to make qualifications on people until I get around them.”
2 months ago – via Twitter IanBegley

share
tweet
send
sms
email
I’ve been told that getting a big man who can shoot is one of the things the Knicks hope to do in the offseason. I don’t know if that means they are only looking for that player in free agency, or if they would look to draft a shooting big with one of their three draft picks. I believe they want to improve their spacing and have heard the two players you named above mentioned – RJ Barrett and Mitchell Robinson. My opinion is that Danilo Gallinari will be considered. I haven’t heard anything on Davis Bertans, which doesn’t necessarily mean the Knicks don’t have interest in him. New York would need to offer Bertans a significant contract to pry him in free agency. The Wizards have Bertans’ Bird Rights and can exceed the cap to re-sign him at any amount up to his max salary.
4 months ago – via SportsNet New York