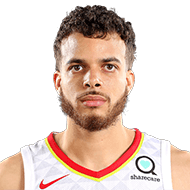 Storyline: RJ Hunter Free Agency
share
tweet
send
sms
email
“It’s always good to come back (to Atlanta),” RJ Hunter said. “Even during a season that I’ve been in the United States and I get to come back home, it’s always good. I’m going to live here for a long time so, I call it home.” Hunter, a two-time Sun Belt Player of the Year at Georgia State, returned to Atlanta last month and signed with the College Park Skyhawks, the G League affiliate of the Hawks, on Feb. 7.
9 months ago – via Zach Koons @ Atlanta Journal-Constitution

Storyline: RJ Hunter Free Agency
share
tweet
send
sms
email
“The NBA is always the goal. At this point, I’m just trying to maximize my talent,” Hunter said. “There’s elite players worldwide that are living great lives, making great money and making a great name for themselves. As much as the NBA has grown, the global game is also crazy. There’s a lot of really really good players overseas. Wherever (basketball) takes me it takes me. I’ve been in the playoffs in the NBA, I’ve started NBA games, I’ve had really good games in the NBA. I have an idea of what that is and if that doesn’t work out, it doesn’t work out. But there’s a lot of other opportunities out there.”
9 months ago – via Zach Koons @ Atlanta Journal-Constitution

share
tweet
send
sms
email
In other Red Claws news, former Celtics two-way player R.J. Hunter agreed to a one-year deal with Turk Telekom on Friday. The 25-year-old, a first-round pick by the Celtics in 2015, scored 17 points in his lone appearance with the Celtics last season and after several years in the G League. He still has an eye toward returning to the NBA after a year in the EuroCup.
1 year ago – via The Athletic

share
tweet
send
sms
email
Jay King: RJ Hunter said he plans to stick with the Celtics for the playoffs. As a two-way contract player, he can’t play, but said he intends to pay for his own travel so he can be with the Celtics throughout their postseason journey.
2 years ago – via Twitter ByJayKing