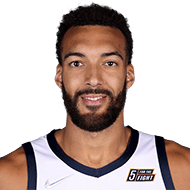 This angle of Russell Westbrook's POSTER on Rudy Gobert 😱

share
tweet
send
sms
email
Kyle Goon: LeBron on the Russ dunk: “He wasn’t going in for a lay-up, or going in for a floater or going for anything else except attacking the shotblocker. That was electrifying. It was big-time. I’ve seen the replay over and over. It was a phenomenal play.”
23 hours ago – via Twitter kylegoon

share
tweet
send
sms
email
Eric Walden: Rudy Gobert, on the Russell Westbrook dunk: “It was a nice dunk. I felt like I couldn’t jump because his arm was on my shoulder, but they’re not going to call that. … I don’t think he said anything to me. He’s a guy who likes to talk to himself.”
23 hours ago – via Twitter tribjazz

The last couple of days has been full of petty sniping back and forth in press conferences: first, Gobert noted how the Jazz didn’t have the winning habits of the teams above them in the Western Conference, the Warriors and the Suns. Then, he noted how impressed he was with Devin Booker’s defense with the Suns over the last couple of years. If you don’t think that’s a shot at Mitchell’s defense, well, I have a bridge to sell you, you poor gullible sweetheart. But Mitchell (and Clarkson), who liked Gobert’s tweet, didn’t exactly come off any better. When they were asked about Gobert’s comments, they gave fairly passive-aggressive comments themselves. And honestly, the quotes from those two, while not benign in verbiage, undersold the annoyance that was apparent in their voices. Oh, and of course, there’s the fact that Gobert, at heart, was basically right about their defense — one way to get Gobert to stop being honest about the team’s bad defense is to just play better defense.
2 days ago – via Salt Lake Tribune

share
tweet
send
sms
email
“That’s the team that we know we can be,” Gobert said. “It’s exciting to see that we have another gear that we can tap into. But this is what we are going to have to bring every single night. “It was important for us to come out tonight and play the right way. It’s a long season, and we know that everything is not always going to be perfect. We know that we are going to have some tough stretches. But if we can keep getting better, we feel like we are going to be in great shape come playoff time. It’s exciting to see what we are capable of doing. So we need to keep building great habits.”
2 days ago – via Tony Jones @ The Athletic

Storyline: Utah Jazz Turmoil?
share
tweet
send
sms
email
Eric Walden: Malone: “It’s evident the last 4 games how important Gobert is to the Jazz defense. They’ve lost 4 in a row and given up a high number of points, which is very un-Jazz-like.”
2 days ago – via Twitter tribjazz

share
tweet
send
sms
email
Eric Walden: Don, on Rudy seeming to call the team out publicly: “We all as a group hold each other accountable. That’s his way, I guess. I’m not too concerned about it. His just happened this way. Cool.”
3 days ago – via Twitter tribjazz