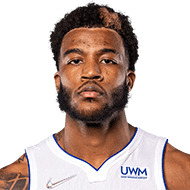 “It is kind of crazy,” Stewart said of his overnight ascension to leadership. “But time flies and I’m grateful for the opportunity. I’m thankful I get to help the young guys out. I was in their shoes coming into the league once.” Stewart and Bey’s work ethic is the absolute tone-setter for the organization and that work has inspired confidence that starts with Weaver and Casey that Stewart is so much more than the undersized post player with limited perimeter potential that was the general scouting view of him after one season at Washington.
1 month ago – via Keith Langlois @ NBA.com

share
tweet
send
sms
email
Stackhouse said there are some similarities between the new roster and the squads of the past. “Cade is super-skilled and he kind of reminds me of Grant Hill,” Stackhouse said. “He can make plays for others, can make plays for himself. This kid, he kind of reminds me of myself, the way that he attacks the basket. I don’t know if I had any point-guard skills (laughs). I’m excited for Saddiq Bey and Stewart. Those guys bring a toughness that really represents Detroit and what we’re about. I think it’s time for them to take that next step.”
4 months ago – via Detroit News

Redick, Tommy Alter and his guest, Chicago Bulls wing Alex Caruso, were asked by a listener on “The Old Man and the Three” podcast: “Which team with a young core are you most excited to see, based off this summer, going into next year?” Redick chose the Pistons. “Obviously Cade, but Saddiq Bey, Jaden Ivey looked great in summer league before he got hurt, and Isaiah Stewart I’m a big fan of. I think he’s a guy that stars in his role. … Troy Weaver has just done an outstanding job, and I don’t know if it’s next year that they take an Oklahoma City Thunder leap, where all of the sudden they’re a playoff team and then the following season a contender. But I’m excited to see them play over the next two or three years, cause I think, in two or three years they will be one of the best teams in the Eastern Conference.” “That’s a big statement,” Caruso said. “To me, that’s dependent on does Cade become — I’m not saying he’s gonna be Luka (Doncic) — but if he becomes a true No. 1 franchise-level player,” Redick said.
5 months ago – via Marlowe Alter @ Yahoo! Sports

So, for the last two months, Bey has been hiking in the mountains of Boulder, Colorado, where he rented a three-story Airbnb. Yes, hiking. “I like being off the grid,” Bey told The Athletic last week. “It’s quiet. It’s peaceful.” Bey’s new pastime, though, is part of a bigger plan. He didn’t seek out hiking. That just comes with the environment he temporarily calls home. Bey also didn’t spin a globe, close his eyes and move to whichever state his finger landed on. It was all strategic and picked with basketball in mind. In that world, Colorado is known for its altitude. At higher elevations, breathing isn’t easy. Fatigues sets in quicker. If someone is in shape in Colorado, they’re in shape everywhere.
5 months ago – via James L. Edwards III @ The Athletic

“It was recommended to me by the staff (to take time off),” Bey said with a smile at his end-of-season media availability. Many thought Bey needed a hobby; something that could momentarily take his mind and body away from the game that consumes him and perhaps allow him to recover both physically and mentally. A fresh mind goes a long way. So, for the last two months, Bey has been hiking in the mountains of Boulder, Colorado, where he rented a three-story Airbnb.
5 months ago – via James L. Edwards III @ The Athletic