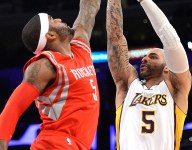 The girlfriend, who has 8- and 1-year-old children with Dalembert, and her cousin initially told police nothing was wrong but later admitted “they did not want Dalembert to know they called 911 because they were scared what he might do to them,” the report said. Dalembert became upset after finding out that his girlfriend was leaving for Orlando with their two children.
6 years ago – via Palm Beach Post

Storyline: Samuel Dalembert Arrest
share
tweet
send
sms
email
The woman had an abrasion on her chin, a swollen lip, a small bruise on her forehead and an abrasion to her left shoulder, the report said. She told police that Dalembert has been “drinking excessively” and “not acting like his normal self” recently. The woman’s cousin said he had to intervene to keep Dalembert from striking her, the report said. Dalembert then allegedly attacked the 26-year-old man, grabbing him by the neck and putting him in a choke hold, throwing him to the ground and head-butting him, the report said.
6 years ago – via Palm Beach Post

Former Knicks center Samuel Dalembert is facing battery charges after authorities say he hit his girlfriend and her cousin. A Boca Raton police report says police responded to Dalembert’s home Sunday evening after a 911 hang-up. The woman and her cousin initially told officers nothing was wrong, but eventually said the 7-foot, 270-pound Dalembert became upset after finding out that his girlfriend was leaving for Orlando with their two children. The cousin told police Dalembert pushed the girlfriend down and then choked the cousin when he tried to intervene. Dalembert was arrested on two counts of battery and released from jail.
6 years ago – via New York Post