share
tweet
send
sms
email
Clemente Almanza: Scoot Henderson on the kids crowd from today’s Blue game: “That was wonderful. I wish we could do it all the time. It was so loud. But I love playing for the kids. I think it’s a great thing.”
2 weeks ago – via Twitter CAlmanza1007

share
tweet
send
sms
email
Clemente Almanza: Scoot Henderson said he doesn’t really have a relationship with any of the Thunder players but mentions how he & Chet Holmgren follow each other on IG: “I didn’t know one of the dudes on the team was 18. That’s what’s up.”
2 weeks ago – via Twitter CAlmanza1007 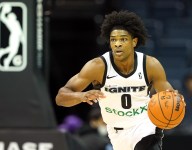 Scoot Henderson turned down shaking hands with Wembanyama the night before their game?

Scoot Henderson is the rare American teenager who is not heavily into social media. So when 7-foot-3 basketball phenom Victor Wembanyama boasted Monday that Henderson would be selected No. 1 in the 2023 NBA draft if Wembanyama hadn’t been born, the G League Ignite star missed it for hours. Henderson’s teammates, however, showed him the quote while attending a reception that also included Wembanyama and his Boulogne-Levallois Metropolitans 92 team on Monday night, sources at the event said. Mere moments after Henderson saw the quote, he was scheduled to swap autographed team jerseys with Wembanyama in a ceremony in front of players and coaches from the G League Ignite, Boulogne-Levallois Metropolitans 92 and G League officials. The uber-competitive Henderson was stone-faced, gave a quick smile for the cameras, swapped jerseys, and didn’t shake hands with Wembanyama before departing on the eve of their highly anticipated televised showdown, sources said.
2 weeks ago – via Marc J. Spears @ Andscape

share
tweet
send
sms
email
“I don’t listen to that. I don’t pay no mind to that,” Henderson told Andscape of Wembanyama’s quote before Tuesday’s exhibition game. “You can talk all you want. That’s it. No added fuel. I’ve had the same fuel. I was going to come out and kill regardless.”
2 weeks ago – via Marc J. Spears @ Andscape

share
tweet
send
sms
email
While Givony ranks Henderson respectfully as the No. 2 prospect, the 18-year-old is a fierce competitor and hasn’t conceded the top spot. “The No. 1 draft pick, that’s the main goal,” Henderson told Andscape. “I’m blessed and honored to be in the position I am in, in people’s eyes. But that really never mattered to me. My competitiveness, my spirit, it makes me want to be No. 1 in everything I do and be great in everything I do. That is my main goal.”
2 weeks ago – via Marc J. Spears @ Andscape