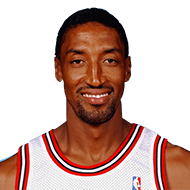 LeBron James joins Bob Cousy, Kobe Bryant, Magic Johnson and Scottie Pippen as the only players in NBA history to lead their team in assists in the NBA Finals for 4+ championships! pic.twitter.com/z4aRKyfMZt

In the history of basketball, I think this NBA bubble is an inflection point. I was wondering what you’ve made of it as a former player and as a viewer. Scottie Pippen: Well, I’m going to be honest. It’s not NBA basketball. It’s not the hard grind. It’s not the travel. It’s not the fans. It’s not the distractions. Really, to me, it’s pickup basketball. It’s going to the gym. Yeah, you already got your team. Y’all practicing together. But it’s a more of a pickup type of basketball game, because there’s no fans in the stands. So there is no distraction. There’s no real noise. There’s no pressure on the players, you know. Prime example: I looked at Rondo. Rondo ain’t made three pointers in his whole NBA career. Now, all of a sudden, he’s in a bubble, he’s probably a 50% three point shooter. I haven’t even checked the stats.
4 weeks ago – via John Lynch @ businessinsider.com

Storyline: Orlando Bubble
share
tweet
send
sms
email
Scottie Pippen: But that’s just something that I consider making the game so easy, because Rondo can’t score inside of an arena, when you got depth perception. Like, there’s a whole lot of things that make the NBA hard. The bubble makes the NBA easy to me. There’s no travel. That’s the killer itself. So you’re sleeping in the same bed every night. You’re walking to the gym. You’re not having to go with a 25 to 50 minute bus ride to an arena. You’re not having to probably even sit in the arena for two hours before the game, talk to the media, deal with all the outside stuff that they’re trying to pull you in to make some distraction and, you know, throw the team in a loop. So it’s a different game, but it’s very entertaining.
4 weeks ago – via John Lynch @ businessinsider.com

And if he happens to go all Scottie Pippen — Grant’s 26-point night in Game 3, saw him drain two treys and head to the free throw line 12 times — along the way, it’s a bonus. Over the Nuggets’ nine postseason victories, the 26-year-old forward’s poured in at least 10 points during six of them. “Jerami, he’s been great for us, and we ask a lot from him,” teammate Monte Morris said. “He starts guarding LeBron. We know how (tough) LeBron is. He’s exerting so much energy on defense, you know, it was good to see him get going on offense. It gave us a great boost and it was much-needed.”
1 month ago – via Sean Keeler @ Denver Post