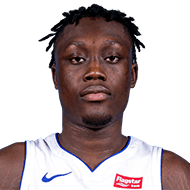 James Edwards III: Casey said he’s been impressed with Sekou. He called him “one of the bright spots.” Went back to his body improvements and conditioning.
2 days ago – via Twitter JLEdwardsIII

Rod Beard: #Pistons Dwane Casey says he’s been impressed with Sekou Doumbouya’s work this summer and he’s shed some of the “baby fat” from last year.
1 month ago – via Twitter detnewsRodBeard

Bouna Ndiaye: Comsport and myself have terminated our professional relationship with player Sekou Doumbouya. We are wishing him the best.
4 months ago – via Twitter Boundiaye

The Pistons are joining the protests, A source told the Free Press that Casey, along with several assistant coaches and players, will march, beginning at the Detroit Public Safety headquarters, 1301 3rd Str, at 4 p.m. Thursday, in support of the protests. Luke Kennard, Bruce Brown, Svi Mykhailiuk, Sekou Doumbouya and Brandon Knight are all expected to attend.
4 months ago – via Detroit Free Press

The Detroit Pistons confirmed Saturday that rookie Sekou Doumbouya is back in France while NBA play is on hold because of the coronavirus crisis. The league recommended players avoid non-essential travel, but players — in concert with their team — could choose to go to another city and stay there.
5 months ago – via ESPN

share
tweet
send
sms
email
A Pistons spokesman said the team is aware that the 19-year-old Doumbouya is in France, and that he left to be closer to family during this pandemic.
5 months ago – via ESPN

share
tweet
send
sms
email
Emiliano Carchia: Pistons rookie has left USA to return to Paris, France, according to a photo posted a few hours ago on Instagram. Stories from same IG account confirm he was with his friends in Paris. Pistons were not aware that he had left USA to return to France, I am told pic.twitter.com/Cgh5GzDjgl
5 months ago – via Twitter Carchia

share
tweet
send
sms
email
Who has the worst taste in music? The “winner”: Doumbouya (4) Others receiving votes: Maker (3), Snell (1), Mykhailiuk (1), Brown (1) Despite Doumbouya’s propensity for French rap, much of the displeasure with his music actually came from his American selections. “He’ll put on some gibberish like Young Thug, and I can’t do it,” one player said. “He’s 19, so he likes the young stuff. He listens to French rap, and I respect that. I don’t dislike it. I can’t do the mumble rap. I like some of it, but I can’t listen all the time.”
6 months ago – via James L. Edwards III @ The Athletic

share
tweet
send
sms
email
Who is the funniest? The winner: Doumbouya (6) Others receiving votes: Brown (2), Snell (1), Khyri Thomas (1) I know that this poll was supposed to be anonymous, but this dialogue between me, Doumbouya and Brown will give you an idea as to why Doumbouya, who was constantly described as “silly,” won this category comfortably.
6 months ago – via James L. Edwards III @ The Athletic