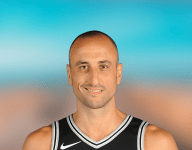 This rumor is part of a storyline: 107 more rumors
share
tweet
send
sms
email
If you live in the United States, there is a good chance you have never heard of the New Zealand Breakers basketball team. But an ownership group that includes Shawn Marion, Victor Oladipo and former pro basketball player Matt Walsh has been working to change that by positioning the club as a premier destination for global high school-aged talent.
1 month ago – via Sportico

Shawn Marion on LeBron, Kobe and MJ comparisons: “Let’s just appreciate what he’s done, man. I mean, right now and I’ma leave it like this. Last time that I checked MJ was the first person to wear number #23. Is he not? So the next person to take the number #23? It was LeBron. But Kobe emulated everything MJ did on the court; from the fadeaway to all that other stuff and he truly patented his game after MJ. I don’t think LeBron ever tried to do that. I think LeBron is setting out to follow in his [MJ’s] steps to try to be the best player he can be in this generation, which he did. Because when you look at it I think it’s generational.
3 months ago – via Bally Sports

Shawn Marion: I think LeBron, by far, has been one the best athletes that we’ve witnessed to see right now and we’ve got to appreciate it. Stop trying to compare the two. If you’re really going to try to compare those two, Kobe was the closest thing skillswise to MJ, but LeBron is a different type of player. I mean, athletic-wise when you look at LeBron you don’t look at him as a scorer-scorer because he does everything on the floor, and he wants to do everything on the floor. So just appreciate it for what he’s done and how he’s doing it; going to as many NBA Finals and vice-versa and just leave it at that. I don’t think that you can compare the two. I think MJ is in his own lane just as well as LeBron is in his own lane. I got the chance to play against LeBron, Kobe and MJ and I gotta say Kobe as far as skill set and mentality is the CLOSEST thing to MJ.
3 months ago – via Bally Sports

Storyline: GOAT Debate
share
tweet
send
sms
email
The National Basketball Retired Players Association convened for its inaugural “Summer Getaway” in Las Vegas during the first three days of the NBA’s Vegas Summer League. Approximately 100 of the association’s 1,500 members attended events at Vegas Summer League, Topgolf, Cascata Golf Club and JEWEL. No matter their age, no matter their generation, they all can bond over one thing. Basketball. “It’s a fraternity,” said former NBA All-Star Shawn Marion, who played at UNLV and won an NBA title in 2011 with the Dallas Mavericks before retiring in 2015. “All the old heads paved the way for us. It’s awesome.”
6 months ago – via Sam Gordon @ Las Vegas Review Journal

share
tweet
send
sms
email
Several other current and former NBA players also have ownership stakes with NBL teams. The Houston Rockets’ John Wall and Dante Exum (a Melbourne native) and former NBA players Zach Randolph, Al Harrington and Josh Childress are owners of South East Melbourne. Miami Heat guard Victor Oladipo and former NBA players Shawn Marion and Matt Walsh are part of the New Zealand Breakers’ ownership group. “Being a part of an ownership group is something I wanted to do, for sure,” Middleton said. “As a player it could be tough. But I realize the responsibilities I had wasn’t going to really affect my basketball career right now. But it’s something I think a lot of players are starting to trend towards is finding ways to invest their money, finding things to do with their money that can grow, and it’s something I’m interested in.”
7 months ago – via Marc J. Spears @ The Undefeated