share
tweet
send
sms
email
Most of those aforementioned individuals, all fine coaches and top-notch people, are now in the unenviable position of scrambling for another NBA job. There are a precious few available as Augmon, who was fired over the weekend at the NBA Combine in Chicago, will soon discover. But if Augmon is bitter about not being released sooner, when everyone in the world knew Prunty wasn’t going to be retained as head coach, he isn’t showing it. When I contacted him, he didn’t bemoan his fate or blast his former employers. Instead, Augmon, who had a productive, 15-year career as an NBA player and was once an assistant coach in Denver, handled the harsh news as the consummate professional he is. “It’s disappointing but I understand the business,’’ said Augmon, who was hired in Milwaukee two seasons ago by former Bucks head coach Jason Kidd. “They’re bringing in some good coaches; that’s a good staff.’’
4 years ago – via Woelfel's Press Box 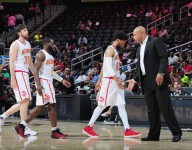 share
tweet
send
sms
email
Marc Stein: Story going online now: Milwaukee is closing in on the addition of Stacey Augmon to the Bucks’ coaching staff, according to league sources.
5 years ago – via Twitter ESPNSteinLine