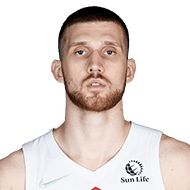 The New York Knicks announced today that the team has signed guard/forward Svi Mykhailiuk to a contract.
3 months ago – via NBA.com

share
tweet
send
sms
email
Fred Katz: Svi Mykhailiuk’s contract with the Knicks is one year for the minimum, source says. Partial guarantee for $50K on it.
3 months ago – via Twitter FredKatz

Now Sviatoslav Mykhailiuk is expected to consider his options. His priority is one: to stay in the US by finding an NBA contract. After all, this is a player who has grown up with the American mentality, having attended a very good college program (Kansas), while in recent years he has been finding stable contracts on the other side of the Atlantic (Pistons, Lakers, Thunder, Raptors). Since he is a free agent he will look at every option on the table, but his absolute priority remains the NBA, without ruling out the prospect of the G-League, so that through there he can find the opportunity to return to the top basketball league of the world. After all, he is at a very productive age (25), he knows he has a lot to give and he wants to test his strength against the best.
3 months ago – via SDNA

share
tweet
send
sms
email
This has the consequence of leaving aside the choice of Europe. Since he is a free agent and considering his performances at Eurobasket 2022, it makes sense that he has attracted the interest of European clubs, but a return to Europe is not on his mind.  At least at this juncture, aiming to exhaust the scope for a contract on the other side of the Atlantic.
3 months ago – via SDNA

GeorgeZakkas: Sviatoslav Mykhailiuk said at @SdnaGr about his future: “I just focus on our games with Ukraine. Whatever happens, happens”. #EuroBasket
3 months ago – via Twitter ZakkasGeorge