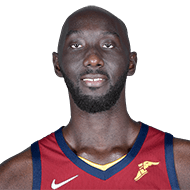 share
tweet
send
sms
email
Tacko Fall had an inkling during Tuesday’s practice that he could be in the starting lineup for Wednesday’s game against Boston. As the Cavaliers went through practice, he was in the first five of the group. As he practiced with that group, he pondered the possibility he could be starting. Then during Wednesday morning’s film session, the coaching staff told Fall he was starting at the five. “From there, I was like, ‘Wow, this really happened,’” Fall said. “You work really hard to get to this point. I mean, this is my third year, and after three years to finally get the opportunity to start an NBA game, that’s something that I’ve dreamed of for a while. And the opportunity came, and it happened. So it felt great.”
1 year ago – via Kelsey Russo @ The Athletic

share
tweet
send
sms
email
“It felt really nostalgic,” Fall said. “Boston, I mean, I’m not there; I’m a Cav now, but Boston is always gonna mean a lot to me. And this is almost like a second home for me, coming from a different country. This was my first time being a pro, and how I was embraced here (means this) is just a place where I feel like I could always come back and call it home, so it definitely meant a lot to me.” Fall earned his first NBA start in the midst of Cleveland’s roster being decimated with players in the health and safety protocols. The Cavs currently have seven players in the protocols and eight total players sidelined, with Collin Sexton out after season-ending surgery for a meniscus injury. Through this upcoming stretch, as they await the return of their bigs, Fall could see more time in the lineup for the Cavs. Fall is on a two-way contract, also splitting time with their G League affiliate, the Cleveland Charge.
1 year ago – via Kelsey Russo @ The Athletic

Marla Ridenour: Cleveland Charge center Tacko Fall has been named NBA G League Player of the Week. @ChargeCLE went 2-0 as Fall averaged 22 points on .810 shooting from the field, with 14 rebounds, 2 blocks and 0.5 steals in 28.0 minutes. Fall is on a two-way deal with #Cavs
1 year ago – via Twitter MRidenourABJ