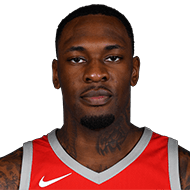 Teammates with the Lakers for two seasons from 2014-16, Tarik Black had a front-row seat for some of the most memorable moments of the final days of Bryant’s Hall of Fame career. But none of them can top April 13, 2016. That was the date of Bryant’s last NBA game. And the former Jayhawk said he remembers every detail of that night at Staples Center. “Allen Fieldhouse was one of the most electrifying places I’ve ever played been in my life,” Black told the Journal-World during a recent phone interview from Los Angeles. “But everything else pales in comparison to that night of Kobe’s last game. I’ve never experienced a feeling or been a part of a sports moment like that in my life.”
1 year ago – via Lawrence Journal-World

share
tweet
send
sms
email
Black remembers being with Julius Randle, Larry Nance Jr. and Jordan Clarkson the afternoon of that game when he first saw Bryant arrive at Staples Center. Together, they approached the man they affectionately called “O.G.” and gave him a simple message. “We walked up to him and said, ‘You’re going to take every shot tonight,’” Black recalled. “And he was like, ‘No I’m not. Just play basketball.’ And we were like, ‘No, O.G. You’re going to take every shot. If we get an offensive rebound, it’s coming to you.’”
1 year ago – via Lawrence Journal-World

share
tweet
send
sms
email
Throughout the night the team’s rowdiest section, known as the Gate—Hashaar in Hebrew—leads the 10,000-plus fans in chants. On the bench Avdija volleys questions at the teammates who cycle through the seats next to him. He leans into huddles during timeouts. For the entire second half, he doesn’t wear a warm-up top, as if to say, I’m ready. “He’s figuring out his place, he’s figuring out his rhythm,” Tarik Black, a Maccabi center and NBA veteran, says in the locker room afterward. Before EuroLeague play was suspended in March, Avdija was averaging 4.0 points and 14.3 minutes in 26 games. If his minutes are limited in consecutive games, he’ll practice twice in one day, putting in the extra work. “That’s how I recover,” he says.
1 year ago – via Sports Illustrated

share
tweet
send
sms
email
Maccabi FOX Tel Aviv announced its new deal with Tarik Black that goes through the 2020-21 season on Tuesday. This new deal offers Black an NBA opt-out both for this and next summer.
2 years ago – via EuroHoops.net

Storyline: Tarik Black Free Agency
share
tweet
send
sms
email
Sessions, 32, arrives in Maccabi essentially as a replacement for injured guard Jeremy Pargo who has been ruled out for two months with a back injury. Maccabi, that is currently 1-4 in EuroLeague, adding another former NBAer this season after Tarik Black and Johnny O’ Bryant.
3 years ago – via EuroHoops.net

Orazio Cauchi: Hearing that the deal between Black and Maccabi is now done, per source. An official announcement should arrive soon. Very solid move for Maccabi.
3 years ago – via Twitter paxer89