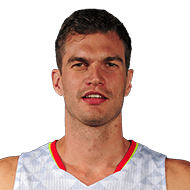 Position: -
Born: 01/01/85
Height: 6-11 / 2.11
Weight:231 lbs. / 105.2 kg.
Earnings: $47,016,000 ($51,697,964*)
0 share
share
tweet
pin
sms
send
email
Ibiza is six hours ahead of New York and Gasol was just settling in for dinner close to midnight, as is European custom, when his agent called to say that San Antonio was strongly considering taking him with the 28th pick. “Up to that point I didn’t really care much about it,” Gasol said, “and then when the competitive nature kicks in and you’re like, ‘OK, let’s see where I’m at and see what people think of me a little bit.’ “And yeah, that’s how it all started.” But the Spurs did not draft Gasol. They used their pick on another international big man, Tiago Splitter, who was available despite projections he would go higher in the draft. This was when one of the world’s most cerebral basketball minds got an idea. A very, very stupid idea.
1 month ago – via Bill Oram @ The Athletic

“We’ve assembled an experienced staff of high-character individuals with varied backgrounds, both on and off the court, that will help create a solid foundation for me and our players,” said Nash. “When I set out to build this staff, I wanted to put together a committed group that would connect with our players and help put them in the best position to succeed as a team. With coaching and playing experience at the highest level and a deep background in player development, I’m confident that we’ve put the right people in place to lead us forward.”
3 months ago – via NBA.com

share
tweet
send
sms
email
Alex Schiffer: Asked Vaughn if he ever had to guard Crawford as a player and Vaughn said his NBA memories are blending together. Players were asking him today if he coached assistant coach Tiego Spitter with the Spurs. “I think I said yes.”
7 months ago – via Twitter Alex__Schiffer

Tiago Splitter: The apex of my career in Europe happened at one of the most difficult times of my life. I won the Copa del Rey with a last-second basket and was Season MVP and Finals MVP. But I was down. My sister had died just the week before. The only moment I wasn’t thinking about Michelle was when I was on the court, only there could I distract myself from the grief. I blamed myself. Should I have left Brazil? Did I really have to?
1 year ago – via UOL

share
tweet
send
sms
email
Tiago Splitter: I had thick skin, but at that moment I asked myself: “Is the NBA too big for me?” Even the Spurs coach noticed. One day, after a game, I was going back to the bus, and Gregg Popovich grabbed me by the arm. – Sit here. Are you sad? Are you mad? – Yeah, I’m sad and I’m mad. – Is it because you’re not playing? – Yeah. – Well, then you’d better not stay sad because you are not going to play. The team’s ready. The team is set. It’s the same guys as last year. Keep training hard. You’re training well. Keep working and next year you’ll play more.
1 year ago – via UOL

share
tweet
send
sms
email
Tiago Splitter: After being the first Brazilian NBA champion, I was the first in the league to play with a prosthetic hip. It was more than 12 months of recovery, a lot of physiotherapy, to be able to come back and play. And it’s not like I came back playing spectacularly well. Not at all. I was pretty mediocre. But I was so happy to be back that I didn’t care.
1 year ago – via UOL