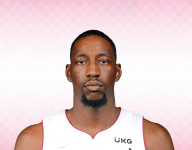 Ira Winderman: Heat announce they will honor Bam Adebayo for his Olympic gold in Tokyo at halftime of Friday’s game vs. Hornets. As part of the event, his new Olympic banner will be unveiled alongside those of Mourning, Hardaway, Wade, LeBron.
1 month ago – via Twitter IraHeatBeat

share
tweet
send
sms
email
He scored 20 or more points in four of the Mavs’ seven games against the LA Clippers in the first round of the playoffs, including 28 in Game 2. What will it take to get Hardaway Jr. to sign with the Warriors in August? “That’s up to [president of basketball operations] Bob Myers (laughter),” Tim Hardaway Sr. said Tuesday on 95.7 The Game’s “The Morning Roast” show. “He knows who his agent is — Mark Bartelstein — he has to talk to Mark. “First of all, does he want to come there? Second of all, will he flourish there? Yeah, I think he would. Do they have the money to get him there? There are a lot of variables involved with that.”
6 months ago – via Drew Shiller @ Yahoo! Sports

“No open threes,” Lue said Sunday before Game 4, after the Clippers allowed 55 3s in the first three games. “We want to run Tim Hardaway off the 3-point line. He’s shooting at a high clip, and that’s what we wanted to do coming into the series, and we haven’t done a good job of that. We know Luka is going to cause a lot of attention on the floor, but we have to be aware with Tim Hardaway there, as well as Kleber. Make them put the ball on the floor. We come low man, trap the box… But whatever we need to do to get him off the line, those two guys, we have to do it. We’ve got to do a better job with that.” It took four games, but Lue saw the message get through. The Clippers didn’t allow Kleber to score in Game 4, as he missed all three of his field-goal attempts (all 3s). None of Kleber’s attempts came in the first quarter. Hardaway made two free throws after George fouled him on a first-quarter drive, but Hardaway missed both of his field-goal attempts (both 3s) in the first quarter and was held to four points on 1-of-8 shooting for the game.
6 months ago – via Law Murray @ The Athletic

Stan Van Gundy: If Tim Hardaway is being denied entry into the Basketball Hall of Fame you better remove some guys who were fined for using gay slurs during their career. Tim has disavowed those comments and supports LGBTQ+ rights. Vote this man into the Hall!
7 months ago – via Twitter realStanVG