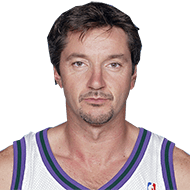 share
tweet
send
sms
email
Remember how Toni Kukoc was dubbed “Bambi” by some disparaging Chicago teammates? Dirk Nowitzki had critics wondering how well he would fare while getting bumped and bruised in ways that didn’t typically happen overseas. But the NBA itself is a lot less physical now, with 3-point mania and the abolition of hand-checking on defense opening the door to a more finesse game. Also, NBA style has been embraced in so many other global markets. “The only thing I’ve noticed, I’d say over the past 15 years, is that [international influence] used to be great passing, great movement, everything like that,” Brooks said. “Used to be spot-up shooters, cutters, ball movers. But now you’re seeing more 1-on-1 guys, ball handling, guys who are controlling the ball and making moves. Now it really is a worldly game.”
2 months ago – via Steve Aschburner @ NBA.com

share
tweet
send
sms
email
Erik Horne: In his abbreviated media availability earlier this evening, Thunder first-round pick Aleksej Pokusevski said the players he looked up to in his journey to the NBA were Kevin Durant and Toni Kukoc.
5 months ago – via Twitter ErikkHorne

Almost every player on the Chicago Bulls championship squad has a Rodman story, and Toni Kukoč is no different. “They’ve been teammates for three seasons with the Bulls, and in one of his older interviews, Kukoc talked about partying with Rodman during that time and how he wasn’t prepared for everything he had in store for them that night. It’s a special type of story, and I couldn’t keep up with him. I partied only once with him because, after that, you need a 7 to 10 days recovery period afterward.” Toni Kukoc, via Svlacionica.
5 months ago – via Basketball Network

share
tweet
send
sms
email
Rodman played big both on and off the court, and if you were in his company, you are pretty much guaranteed to have a great time. Kukoc remembers that even though there were only four of them in the bar, Rodman ordered drinks for 20 people just so that the bar doesn’t close, and people there have a good time. Everybody who was at that bar had everything free the courtesy of Dennis. “There were four of us out, and the first thing he ordered for a drink was 40 shots of vodka and ten beers. I asked him if there are more people coming, and he just said it’s important to keep the bar open. Everybody who was at the bar that night, he had free food and drinks on Rodman.” – Toni Kukoc, via Svlacionica.
5 months ago – via Basketball Network

share
tweet
send
sms
email
Retired Chicago Bulls great Toni Kukoc and his wife, Renata, sold their longtime, contemporary-style house in Highland Park on Oct. 15 for $920,000. The Croatia-born forward played for the Bulls from 1993 until 2000, helping the team win six NBA titles. After retiring from his playing career in 2006, Kukoc most recently has been a special adviser to Michael Reinsdorf, the Bulls’ president and chief operating officer.
6 months ago – via Bob Goldsborough @ Chicago Tribune

share
tweet
send
sms
email
Why was the decision made to really elevate Steve Kerr especially with respect to the 1998 playoffs? He was always a role player. Meanwhile, Toni Kukoc kept them alive in Game 7 versus Indiana. Jason Hehir:We needed to find places within the doc to tell individual backstories. Toni’s was in Episode 5 when he faced the Dream Team. Steve’s was in Episode 9 when he hit his famous ’97 Finals shot. Hardcore NBA/Bulls fans couldn’t be our target audience, but unfortunately they’re our biggest critics because they wanted this largely to be about on-court events. We had to keep in mind that our audience is also the 20-year -old kid from France who barely knows what basketball even is. The amount of positive response we’ve gotten from countries that aren’t basetkball-crazy tells me we struck the right balance. I hope so, anyway.
9 months ago – via reddit