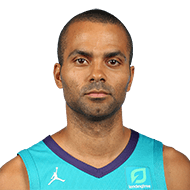 Four-time NBA Champion Tony Parker recently lent his private collection of life-size statues to the San Antonio Museum of Art for an exhibit called “Tony Parker’s Heroes and Villains.”
3 weeks ago – via KSAT.com

Whether you want to call it a dynasty or not…when you talk about the Warriors, a lot of people like to go back to the Lakers and their three-peat in the early 2000s, and obviously the Bulls and their six titles. Do you think the Spurs get underlooked in that conversation? Tony Parker: “To a certain extent. But in the world of basketball, everybody knows we had an unbelievable run, maybe one of the best runs in 20 years in the NBA, if you look at playoffs and all that kind of stuff and all the success we had over the years. I understand that we talk about the Bulls, Lakers, Celtics, Warriors — it doesn’t bother me because when I go home, I have my four rings too. So, I will put them against anybody.”
3 weeks ago – via Prince J. Grimes @ For The Win

share
tweet
send
sms
email
Is there any coaching in your future? Tony Parker: “I prefer the front office right now. I’m in my box, we just won a game, one of the semifinals in the French league, back-to-back champs. So I like the front office side. And one of these days, I’ll try the NBA, but right now I want to give back to my country. It’s been a lot of fun owning the men’s team, the women’s team. And the academy that I’m building here, we have great young guys on my team. We have maybe the number one draft pick in 2023. He’s 17 right now, he’s playing unbelievable. So it’s been a lot of fun giving back to my country. But one of these days, you know, when coach Pop retires, maybe I’ll come back .”
3 weeks ago – via Prince J. Grimes @ For The Win

In just a year, Tony Parker, who counts himself a friend of French President Emmanuel Macron, has achieved what the biggest racing operations in the world couldn’t. His rivals might be backed by billions, but it was Parker’s £40,000 horse who trounced them all last Sunday. Parker’s three-year-old filly Mangoustine won the French 1000 Guineas at ParisLongchamp – beating British heroine Cachet in the process.
2 months ago – via Sam Morgan @ The Sun

share
tweet
send
sms
email
While his horses are quick, Parker’s time in the sport certainly isn’t going to be. The four-time NBA champion said: “I’m here for a long time. When I decided to invest in the horse world, it was to last. I was waiting for this moment after having spent 20 years of my life in Texas, where I was surrounded by horses and raches.”
2 months ago – via Sam Morgan @ The Sun

“Tony Parker had a floater, but he also would get to the rim and he was able to put the ball on the backboard in different spots where the big couldn’t get it,” Maxey says. “And then Kyrie [Irving] … studied the spots on the backboard where you can spin it and it’ll fall in.” Now, according to ESPN Stats & Information, Maxey is finding success attacking the rim from every angle. And while he’s going to his floater 4% less than last season, his 72 makes through this regular season and playoffs still rank among the top 10 leaguewide. Maxey shot 60.5% on layups and dunks during the regular season, up from 54.7% in 2020-21. He’s been automatic in the playoffs, going 13-for-13 from the restricted area.
2 months ago – via Tim Bontemps @ ESPN