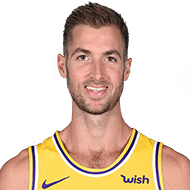 After helping South Bay to a playoff victory last night, @TravisWear has been recalled by the @Lakers and is expected to be in uniform for their game tonight against the Spurs.
4 years ago – via Twitter

Harrison Faigen: The Lakers have called up Travis Wear from the @SouthBayLakers
4 years ago – via Twitter hmfaigen

Mike Bresnahan: Travis Wear has been assigned to the South Bay Lakers, who begin G-League playoffs tomorrow afternoon vs. the OKC Blue.
4 years ago – via Twitter Mike_Bresnahan

“It’s been great (playing with Lonzo). I mean, he gets in the lane and he gets separation, he drives and kicks. Every time he passes me the ball, I’m looking to shoot. He’s so unselfish. It’s contagious.”
4 years ago – via spectrumsportsnet.com

The Los Angeles Lakers have signed forward Travis Wear for the rest of the season, it was announced today by General Manager Rob Pelinka. Wear has averaged 4.8 points, 2.2 rebounds and 12.1 minutes in 10 games since signing the first of two 10-day contracts with the Lakers on March 2. Initially called up from the South Bay Lakers, the Huntington Beach native is shooting 40.0 percent from three-point range.
4 years ago – via NBA.com