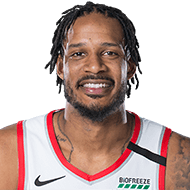 Joe Mussatto: Per Thunder spokesperson: Trevor Ariza will not be with the Thunder as they begin full team practices. Ariza remains focused on the same family matters that kept him from attending the bubble with the Blazers ...
3 months ago – via Twitter joe_mussatto

share
tweet
send
sms
email
David Hardisty: KJ Martin mentioned that he worked out with a lot of pros, including Montrezl Harrell, Trevor Ariza, Pascal Siakam and also James Harden joined some of those games and workouts. He saw the change in the pros — bigger players, game more spread out.
3 months ago – via Twitter clutchfans

A judge has thrown out a restraining order against NBA player Trevor Ariza — after determining he did NOT physically abuse his 12-year-old son, TMZ Sports has learned. As we previously reported, the Oklahoma City Thunder player has been locked in a custody battle with Lana Allen, the mother of his child.
3 months ago – via TMZ Staff @ TMZ.com

share
tweet
send
sms
email
Finally, on Monday the judge issued his opinion on the case saying Ariza has not — and does not — pose a threat to his child. Therefore, the temporary restraining order has been dissolved and the request for a permanent one has been denied. “The court finds that while the relationship between Ariza and [his son] is clearly strained, his son is not in any physical or emotional danger with his father.”
3 months ago – via TMZ Staff @ TMZ.com

After a busy NBA offseason that saw him traded an astonishing three times – from the Portland Trail Blazers to the Houston Rockets, who sent him to the Detroit Pistons who then, finally, traded him to OKC – Trevor Ariza made league history by becoming the player to be traded the most times ever at 10. The league’s new all-time leader in trades, he might not be done moving yet, either, as the Thunder are in the midst of a full teardown, making the 35-year-old an unnecessary fit there. Ariza could very well be sent to a contender in need of perimeter shooting and defense before long – maybe even as soon as prior to the 2020-21 season tipping off.
3 months ago – via Frank Urbina @ HoopsHype

Dwain Price: The #Mavs have acquired F James Johnson from OKC in a 3-team trade. The Mavs shipped F Justin Jackson to OKC and G Delon Wright to the Pistons, who sent F Trevor Ariza to OKC. The Thunder also received a 2023 2nd-round pick from DAL or Miami, and a 2026 2nd-round pick from DAL.
3 months ago – via Twitter DwainPrice