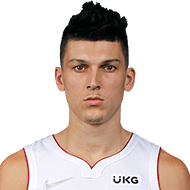 Position: G
Born: 01/20/00
Height: 6-5 / 1.96
Weight:195 lbs. / 88.5 kg.
Salary: $5,722,116
0 share
share
tweet
pin
sms
send
email
“Charlotte’s in a tough position with the (Miles) Bridges thing, they have (Steve) Clifford coming in, they’re in a position to rest things a little bit around LaMelo Ball. Hayward has two years left,” the exec continued. “If you want to give up [Tyler] Herro before you pay him and you want to move [Duncan] Robinson, you would have to add a pick, but those two guys and Omer [Yurtseven], that might be enough to get Hayward if the Hornets decide to reconfigure. It’s a short-term move for Miami, but they need to make their move now. You can play him at the 3 and go big or go small at the 4. He’s a guy they’ve had interest in before.”
3 days ago – via Emily Bicks @ Heavy.com

share
tweet
send
sms
email
[Tyler Herro] has reached this strange point just as he becomes the key veteran in any potential Miami Heat trade package for Kevin Durant, Donovan Mitchell, or whichever star becomes available next. The Heat so far have not gotten much traction on either front, sources say, but they are still trying and can never be counted out.
2 weeks ago – via Zach Lowe @ ESPN

What will peak Tyler Herro look like? Ask 50 executives and coaches, and the gap between answers will be wider than for possibly any other NBA player. You hear everything from “All-Star” to “Lou Williams/Jamal Crawford 2.0” — a one-way bench scorer who will get exposed on defense in the playoffs.
2 weeks ago – via Zach Lowe @ ESPN

share
tweet
send
sms
email
After following his Sixth Man of the Year runaway with a shaky, injury-marred postseason — Herro averaged 13 points on 41% shooting, including an ugly 23% on 3s — Herro is perhaps the most polarizing high-wattage player in the NBA. He has reached this strange point just as he becomes the key veteran in any potential Miami Heat trade package for Kevin Durant, Donovan Mitchell, or whichever star becomes available next. The Heat so far have not gotten much traction on either front, but they are still trying and can never be counted out. If Miami pulls off a superstar trade, it’s going to be in part because the team on the other end is higher on Herro than consensus.
2 weeks ago – via Zach Lowe @ ESPN

share
tweet
send
sms
email
Herro almost suffers from his own success, and the Heat’s. He has played 40 postseason games. Barnes has played four, Barrett five. Barnes and Barrett retain the allure of the unknown. They have not faced the best teams, over and over, or been central players in the only game of the night in late May and June. They have not battled the nastiest defenders in the highest-stakes games, been the target of specific game plans, or guarded superstar scorers with everything on the line. Herro has faced all of that, and the results have been — as you’d expect — uneven. We’ve seen his warts. He feels more like a finished product, but Herro is still just 22.
2 weeks ago – via Zach Lowe @ ESPN

Barry Jackson: You guys are asking me KD questions under every Dolphins/Marlins post. Here’s the deal: Nets aren’t tempted by Herro-led package.Heat’s chances thus hinge on Durant insisting to be moved & to only Miami/ Phoenix AND encouraging other teams not to pursue him, which hasn’t happened
3 weeks ago – via Twitter flasportsbuzz