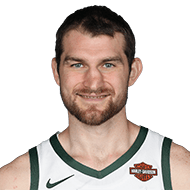 Position: -
Born: 01/17/90
Height: 7-0 / 2.13
Weight:250 lbs. / 113.4 kg.
Earnings: $17,686,467 ($73,897*)
0 share
share
tweet
pin
sms
send
email
Kidd is even described as a frequent patron of the water park food courts. “Kidd had an unhealthy obsession with water parks and would eat lunch at Pelican Cove Water park 4 days a week,” said former player Tyler Zeller. “It’s not that I don’t enjoy water parks, but when someone is screaming at you to be his human inner tube for every ride in the park, you start to wonder what this has to do with basketball.” Bucks forward Khris Middleton thought Coach Kidd’s water park infatuation was a plot to get at single moms. Turns out, his heart was actually pursuing something 50-feet tall, made out of plastic, shaped like a screw and capable of sending him into a vortex of aquatic thrills. He really was just there for the slides.
5 months ago – via OutKick

Rick Bonnell: BREAKING: @Cody Zeller was able to practice live today with the @Charlotte Hornets. Timeline for his return from a hand fracture is early February.
1 year ago – via Twitter rick_bonnell

Paul Garcia: The Spurs have waived Tyler Zeller and Cam Reynolds.
1 year ago – via Twitter PaulGarciaNBA 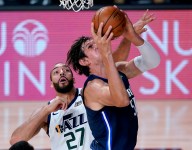 The slowest players in the league, according to NBA 2K21 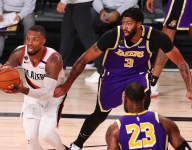 Paul Garcia: Some details from Basketball Insiders. Tyler Zeller’s deal for next season is $2.4 million non-guaranteed. Guarantee date not known yet, but Zeller has already confirmed he’ll be on the training camp roster for next season.
2 years ago – via Twitter PaulGarciaNBA

Zeller’s safety bubble was pierced two Wednesdays ago, when the Spurs called to offer him a job. With seven-time All-Star LaMarcus Aldridge declared out of the NBA’s restart in Orlando, Fla, because of shoulder surgery, the Spurs were in search of a tall, warm body to help fill out their frontcourt rotation. A career-long journeyman who has not appeared in an NBA game since April 2019, the 30-year-old Zeller checked the most important box in the Spurs’ hunt. He was available. “It’s been a whirlwind, but it’s been fun,” the 7-foot Zeller said. “I’m just trying to get used to the new coronavirus protocols. Just happy to be back, playing basketball, back on a team, especially a great team like the Spurs.”
2 years ago – via Jeff McDonald @ San Antonio Express-News