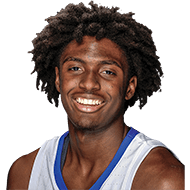 Chris Haynes: Having your pro day on national television is unheard of from a sports agency. How did you go about pulling this off? Rich Paul: What I’d like to say first is the one thing I’m extremely proud of is to see the team we’ve built. Everyone played a major role. Being able to just walk into the gym and see everything positioned properly and running efficiently, it’s a testament to the hard work my team has put in to build something impactful and not just about making money. I can’t thank my team enough. Now regarding our first pro day [in 2019], we had 110 executives in the gym with Darius Garland, Darius Bazley and Talen Horton-Tucker. And last year with Anthony Edwards and Tyrese Maxey, we didn’t have the ability to have executives in the gym because of COVID.
2 weeks ago – via Chris Haynes @ Yahoo! Sports

share
tweet
send
sms
email
I think it’s important to note how much the Sixers adore this kid for the work he puts in when the lights aren’t on. Every person you talk to with the organization raves about his work ethic, publicly and privately, and those are the sort of players you try to hang onto until you simply can’t any longer. The progress he made in a single year was astounding, especially when you consider the insane and unorthodox offseason he had leading into his rookie year. Maxey being able to fix weaknesses and take instruction is a major point in his favor, as evidenced by his defensive progress and the floaters he turned into layups and free throws by season’s end.
4 weeks ago – via Philly Voice

Justin Grasso: Doc Rivers says that Tyrese Maxey and Paul Reed “are two of the hardest working young guys I’ve had in my coaching career and that’s saying a lot.” #Sixers
1 month ago – via Twitter JGrasso_

Tom Moore: #Sixers rookie Tyrese Maxey wants to get back in the gym Friday for next season, though team staff is telling him to take more time off.
1 month ago – via Twitter TomMoorePhilly

share
tweet
send
sms
email
Kyle Neubeck: Tyrese Maxey with a simple off-season goal: “I will get one percent better every single day, and that’s the promise I make to myself.”
1 month ago – via Twitter KyleNeubeck