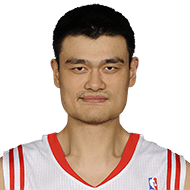 When asked about his “Welcome to the NBA moment” in the Knuckleheads podcast with Darius Miles and Quentin Richardson, the former Bulls center had this to say about (via the Knuckleheads, clip from u/whenmachinescry on Reddit): “It was a guy I haven’t even heard of, it was the Clippers… I had to guard Chris Kaman. I don’t even know who Chris Kaman is, this gon’ be easy… Left, right, on the block, it was crazy, he was talking s— too. I ain’t even heard of this guy and he’s getting buckets. I was like, ‘Tomorrow, Yao Ming, the night after that, Shaq.’ I’m like this s— doesn’t stop.”
1 week ago – via Gerard Samillano @ Clutch Points

China basketball star Zhou Qi has said that he will not play in the upcoming Chinese Basketball Association season because of an ongoing contract dispute with his club, providing a headache for CBA chairman Yao Ming ahead of the new campaign.
3 weeks ago – via SCMP

share
tweet
send
sms
email
Fourteen-year-old Zhang Ziyu has taken the internet by storm in a viral video of her playing basketball, towering over her teammates. The 7-foot-4 prodigy from East China’s Shandong Province became a trending topic Thursday as she helped her team win a title during a competition held in Jingzhou, scoring 42 points, with 25 rebounds and six blocks. Zhang quickly drew comparisons to former NBA star and Chinese basketball player Yao Ming, who is 7-foot-6. According to the Global Times, Zhang was 5-foot-2 when she was in the first grade and 6-foot-9 by the sixth grade.
2 months ago – via Analis Bailey @ Yahoo! Sports

Metta World Peace: Yao Ming was the most selfless superstar I’ve ever met. It’s unreal. He was clearly the best player in our @HoustonRockets team , and I never heard him complain when he didn’t touch the ball. But he would always bail us out .
4 months ago – via Twitter MettaWorld37

“He was always at games early in my career, and he just used to always come up to me and give me advice about certain things,” Favors said. “You know, we just used to talk, and he’d tell stories.” Favors, who stands 6-foot-9 and weighs about 265 pounds, recalled how Eaton was one of the few people he’d ever come across who could make him feel small. “I mean, he was how tall — 7-3, 7-4? Yeah, 7-4. The only other player that I played against that was taller than that was Yao Ming, my rookie year,” Favors said. “He was a big guy, he was a big guy. There was a reason why he was one of the best shot-blockers in the NBA at his time.”
4 months ago – via Salt Lake Tribune

How does your experience playing professional basketball inform the way you run your wine company? Yao Ming: “Both are full-time, year-round jobs. Both require teamwork and vision. You need to trust your teammates and know that the victory comes from collaboration, preparation and hard work.” ­­­­­
4 months ago – via Noah Rothbaum @ The Daily Beast