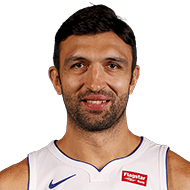 Connor Letourneau: Steve Kerr: “I’m pretty sure Zaza (Pachulia) wants to come down and say hello to Russ (Westbrook). … They have a nice history together.”
8 months ago – via Twitter Con_Chron

share
tweet
send
sms
email
Anthony Slater: Steph Curry relayed a conversation with Zaza Pachulia at halftime: “I saw him in the tunnel and told him his jersey was back there and we need two minutes from him.” Zaza: “Those two minutes would equal two pulled hamstrings.”
10 months ago – via Twitter anthonyVslater

share
tweet
send
sms
email
Pachulia, who played 16 seasons in the NBA and became a consultant for the Warriors after his playing days, added he understood why so many people talked about it because it affected a lot of things. However, he also threw a subtle jab at the media for blowing up the entire incident, which made his situation worse. “If you look at the Eastern and Western Conference, the media had nothing to talk about. Cleveland was sweeping everybody in the first three rounds, we were sweeping everybody as well. We ended that NBA Playoffs, 16-1,” Zaza Pachulia added. “So I guess that was something the media found and said ‘OK, let’s talk about this, let’s make it more interesting, let’s sell the news.’ We all know what kind of world we’re living in. It’s about selling information.”
1 year ago – via Clutch Points

share
tweet
send
sms
email
The 36-year-old revealed that he reached out to Kawhi Leonard after the incident by sending a text message. The then-Spurs star, however, did not respond. “(I texted) Listen, it definitely was not on purpose and hopefully you can get back sooner on the court. I wanted him to know from me because there were so many words out there. I really felt bad. I’m an athlete too. My kids are playing (sports). I don’t want anybody to go through it.”
1 year ago – via Clutch Points

share
tweet
send
sms
email
“Another crazy thing, another small but important detail. Two minutes before that incident happened to Kawhi Leonard on my foot. Two minutes before, Kawhi was going to check into the game, he stepped on his own teammate’s foot and he rolled his ankle. Two minutes prior to that. Nobody is talking about it, nobody. I mean, that’s crazy. When you sprain the ankle, it happened to me so many times in my career, it takes time until you get your ankle back in good shape, with strengthening and making sure you don’t roll the ankle that easily. Look what happened to Giannis [Antetokounmpo] in this year’s playoffs. He rolled his ankle, and the next game, he rolled it again. Out of nowhere. The ankle is already weak, it’s a possibility to sprain it again.”
1 year ago – via Grant Liffmann @ NBC Sports