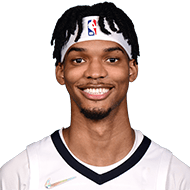 Damichael Cole: Ziaire Williams already looks more actively involved in the Grizzlies offense than any point last season, as he said he would be. Will be interesting to see if he still gets those actions ran for him when the starters play, because he looks promising.
6 days ago – via Twitter DamichaelC

“We tried to develop plans for Jake [LaRavia], David [Roddy], Kennedy [Chandler], Junior [Kenneth Lofton], some of our other younger players. I see Ziaire [Williams] taking a jump in year two, Santi [Aldama] taking a jump in year two. We want these guys to attack this season with a mentality that they’re going to be in the rotation.”
1 week ago – via Paul Terrazzano Jr. @ TalkBasket

Which players do you model your game after? Ziaire Williams: A lot of people say KD , ’cause I’m tall, and I could shoot. I feel like KD’s just KD though. Maybe Paul George, but I don’t know, man. I love to just watch players. Maybe Jayson Tatum’s sidestep or Devin Booker‘s face-up game.  Paul George‘s size up and just take all their stuff and putting it into my own. I’m my own player, we’re all our own players, but if I had to point out players it would probably be my own.
1 month ago – via Sam Yip @ HoopsHype

share
tweet
send
sms
email
What other aspects of your game are you hoping to improve? Ziaire Williams: Everything. Literally everything. I feel like I’m blessed to be 6-9, 6-10. I have the athleticism and speed that you can’t teach. So I honestly feel like once I get stronger, there’s not anything I can’t do on court. Whether it be posting up or shooting threes or dribbling, passing, I want to be the best in everything. So it’s not just one thing I want to improve on.
1 month ago – via Sam Yip @ HoopsHype

share
tweet
send
sms
email
Palmdale native Paul George is really the only player that comes to mind when talking about this area. When you were younger, did you look up to him as a sort of role model? Ziaire Williams: To be honest, I didn’t even know about Paul George until he got to the NBA. But I love Paul George, I’m actually working out with him tomorrow. He’s been a real role model for me watching this game and he goes back to the city as well. You know, he has a whole court and parks out in Palmdale, two of them actually. That’s what it’s all about. You know, just try to just show the next generation that it is possible for your dreams to come true. You know we all came from the same city as them. We’re all human at the end of the day. I just want to let all the kids know that you can do anything you want in life, as long as you just work hard and have fun doing it.
1 month ago – via Sam Yip @ HoopsHype

share
tweet
send
sms
email
Ziaire Williams: The NBA was never a goal. Of course, it’s always what I wanted to do, but I honestly never really thought it would really happen. It was always just to get the best education. Get a free college somewhere because I wasn’t going to be able to afford it. To go through all that adversity, it wasn’t necessarily something I wanted, but it was everything I needed just to be a grown man or a young man now and move on within myself and travel and be everywhere. Like it really prepared me for all the haters and all the extra that comes with the game. It prepared me for that because I know if I can make it through that time, I can make it through any other time in life, so it was definitely one of the lowest points in my life for sure. Just family involved, not even basketball-wise, but everything happens for a reason. So I’m just blessed to be in this position today.
1 month ago – via Sam Yip @ HoopsHype

share
tweet
send
sms
email
Ziaire Williams: Steven Adams, he was a great mentor for sure. Steven is actually very, very brilliant. This is his eighth and ninth year, I think? Just by talking about all the stories and his whole career and just little tips and my recovery stuff. I’ve been able to hold up pretty well for the most part, really because of Steven. He takes care of his body and is probably arguably the best for the team. So I definitely try to integrate his stuff and do whatever I can to stay on the court. Because at the end of the day. You could be the best in the world, but if you’re not healthy, it’s no point.
1 month ago – via Sam Yip @ HoopsHype