The Kings connections, present and past, didn’t stop there, either. Former Kings coach Luke Walton was in attendance, as was Alvin Gentry, the coach who replaced him in an interim fashion when he was fired in late November. Both men are former Warriors assistants and, thus, part of the same Golden State tree that Ranadivé has been fixated on since his days as a minority owner with the organization. (That chapter ended for Ranadivé when he became the lead owner of the Kings in 2013.) Sources say neither Jackson nor Brown was aware that Ranadivé was planning to be in attendance, so it was unclear if there was any substantive meaning to the visit. What’s more, sources say neither Brown nor Jackson was offered the job as of late Saturday evening. As our Shams Charania reported on Friday, Jackson already has interviewed for the Lakers’ coaching job as well.
9 months ago – via Sam Amick @ The Athletic 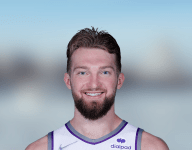 Domantas Sabonis said he’d like to give his input during the Kings’ coaching search, according to Jason Anderson of the Sacramento Bee. Sacramento opted not to retain Alvin Gentry as the team’s head coach. “I would like to be part of it and talk to everyone,” Sabonis said. “Give them my input, what I think, what I’ve seen, what could work, what could help.”
10 months ago – via Hoops Rumors