John Hollinger: Jimmy Butler: 4th among Eastern Conference players in PER, 3rd in BPM, 4th in EPM, and despite supposedly not playing enough games, 7th in VORP. Should have been second name on every East coach’s ballot after Embiid; leaving him out entirely was insane.
11 hours ago – via Twitter johnhollinger

share
tweet
send
sms
email
Jorge Sierra: Most in-form players in the NBA right now. Kawhi at No. 4 is quite the development… pic.twitter.com/e7cuZuLX1a

Most in-form players in the NBA right now.

Kawhi at No. 4 is quite the development… pic.twitter.com/e7cuZuLX1a 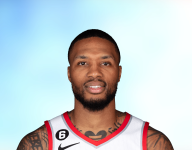 Damian Lillard: 'It's the most efficient 60-point game ever, for real? That's crazy'

Since he doesn’t typically check his phone until he leaves the arena, Lillard was unaware his 60-point night was historic until he was told about it by media postgame. “It’s the most efficient 60-point game ever, for real?” Lillard said. “That’s crazy. I didn’t know that. I’m just sitting here thinking I had a shot at the end of the shot clock from half court toward the end that I shot. It probably would have been a little bit better. I missed a free throw. Damn.”
1 week ago – via Kevin Pelton @ ESPN

Almost any fan of the league would take LaVine, and the general managers seem to agree, as LaVine was rewarded with a max contract this past offseason. But DRIP, our all-encompassing stat that projects how good a player is at this moment in time, raises some eyebrows by ranking Beverley as the 56th-best player in the league and Zach LaVine as the 65th-best player in the league. And DRIP isn’t alone. 538’s RAPTOR thought Beverley was better than LaVine last season, as did BPM, which can be found on Basketball Reference.
1 week ago – via The Analyst 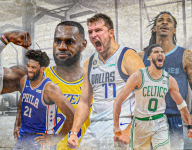 Form Rating: Who are the hottest NBA players right now?

In “clutch” moments, the Knicks have a minus-7.6 net rating, a defensive rating of 120.5 and an offensive rating of 112.9, all below their regular numbers. They were last in assist ratio at 10.2 and 21st in defensive rebounding percentage at 64.6. In the 15-game stretch we are harping on, those numbers are even worse: a net rating of minus-32.1, defensive rating of 132.1 and offensive rating of an even 100. Some of that can be attributed to games that Barrett and Brunson missed or be dismissed as a relatively small sample size. But not all of it. The Knicks have not been the same team in close games. It is why they own a mediocre 7-8 record since their big eight-game December winning streak.
2 weeks ago – via New York Post